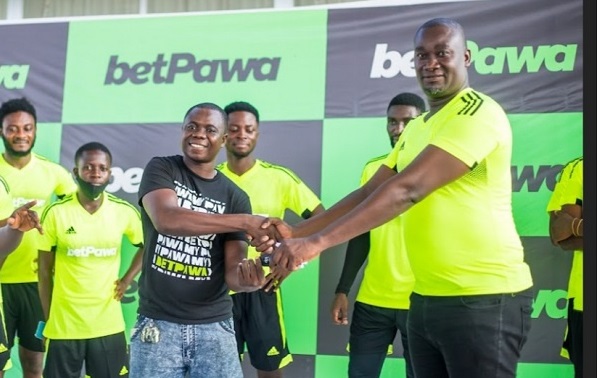 The winner (R) receiving his car keys from a betPawa official

One of the largest Pan-African online betting platforms, betPawa, on Saturday made a customer’s (Douglas Ofei Koranteng) dream come true by handing him a brand new Toyota RAV4 2021 model and launched a new initiative to help many more achieve theirs.

Douglas, one of the eight finalists won a penalty shootout at Accra’s Under Bridge Event Center, East Legon, and drove away in a brand new Toyota RAV4 at stake.

All eight winners were drawn to play in the shootout after placing a bet on the English Premier League in August.

The event was supervised and graced by the Gaming Commission, represented by Bernard Ansah, Operations Officer and Johnson Oduro, Monitoring and Investigation Officer.

betPawa Ghana’s Marketing Coordinator, Nicholas Bati, noted: “I want to congratulate all our eight finalists, indeed they are all winners.”

The latest betPawa initiative was announced at the event: ‘the Dream Maker’ campaign.

The Dream Maker campaign is an initiative open to everyone in Ghana over the age of 18 and doesn’t require any betting activity.

The ambition is to help people realise dreams that will enrich the lives of themselves, their families and their communities.