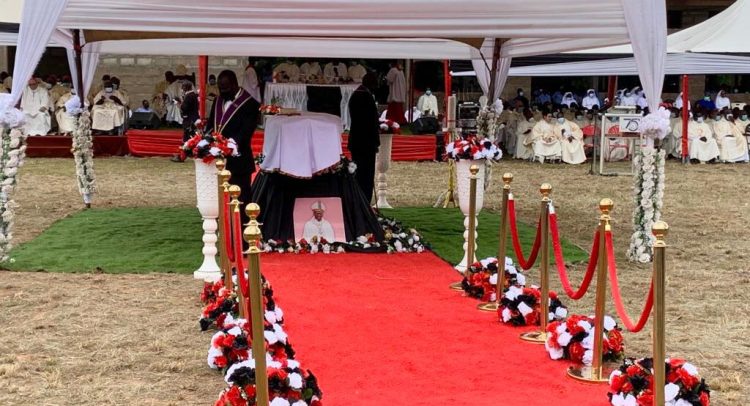 Archbishop Emeritus of Tamale, Most Rev. Gregory Ebo Kpiebaya has been laid to rest at the OLA Cathedral in Tamale in the Northern region.

He was born in 1933 at Nanvilli, a village in the Nadowli District of the Upper West region, ordained a priest for the Catholic Diocese of Wa on September 8, 1962, availing himself as a priest of the Holy Roman Catholic Church for close to 60 years and a Bishop for 47 years.

The late Archbishop Emeritus of Tamale died on May 31, 2022, at the Tamale Teaching Hospital after a short illness.

A Requiem Mass was held at the St. Charles Seminary for the late Most Rev. Gregory Ebo Kpiebaya, Archbishop Emeritus of Tamale.

The late Archbishop Emeritus of Tamale, Most Rev. Gregory Ebo Kpiebaya was appointed the archbishop of Tamale on March 29, 1994, till 2009, and retired at the age of 76 years.

In the Requiem Mass, the Metropolitan Archbishop of Tamale who doubles as the President of the Ghana Catholic Bishops’ Conference, Most Rev Philip Naameh, described the late archbishop Emeritus as a hard-working man of God who with his brother bishops brought about several transformational programmes to the people of the Tamale province.

“ Your pastoral priorities as the archbishop of Tamale was to revamp the pastoral structures to boost evangelization among the people of Dagbon. Your peace efforts in Dagbon in particular and the Northern region, in general, are unparalleled. As a result, you promoted Inter-Religious Dialogue and Ecumenism.”

Most Rev Philip Naameh said the Ghana Catholic Bishops’ Conference has lost one of her strong and dependable pillars, an elder brother who was an embodiment of a prayerful servant of God with vision and determination to win souls for the Kingdom.

Professor Naana Jane Opoku-Agyemang, the Vice-Presidential candidate of the National Democratic Congress (NDC), who graced the Requiem Mass eulogized the late archbishop Emeritus as a man of God who served with diligence, stayed focused, and was a unifier.

“ He turned into opportunities what could have been challenges Archbishop Emeritus Gregory Ebo Kpiebaya you served the God you trusted with diligence, you blessed your Church, family, and even random persons.”

Prof. Dannabang Kuwabong who read a tribute on behalf of the Kpiebaya family said the late Archbishop Emeritus was never selective of his love adding that his doors were always opened to the extended families in Christ such as the Lepers, disabled, widows, orphans, widowers, unwed mothers and the poor.