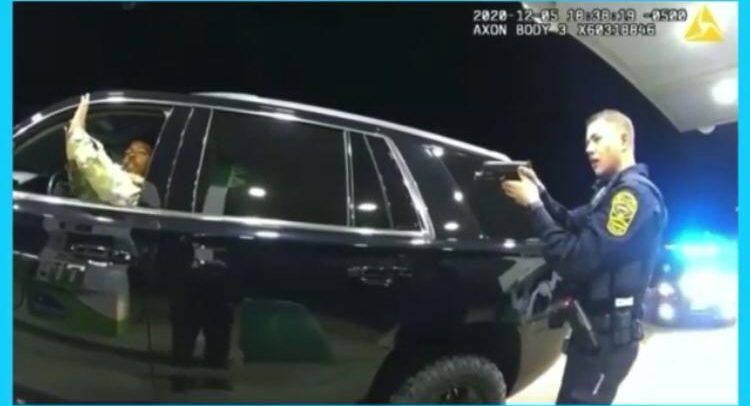 A black and Latino US Army lieutenant, has sued two racist white police officers who allegedly attempted to kill him in traffic.

A video footage dating back to December 2020, has surfaced, showing the two white US police officers, Joe Gutierrez and Daniel Crocker,
stopping the Army Lieutenant , Caron Nazario at gunpoint in traffic.

Nazario filed the suit on Friday, April 9, 2021, filed a suit against the two Virginia police officers, with the video now trending.

The two officers reportedly initiated a traffic stop against Nazario.

The video shows the two officers drew their guns, and pointed them at the Army officer.

The lieutenant noted in his suit that the officers used a slang term to indicate that he was going to be killed.

The officers pepper-sprayed him and knocked him to the ground.

The video showed Nazario, who was dressed in uniform, having his hands held in the air outside the driver’s side window as he told the armed officers, “I’m honestly afraid to get out”, but one of the officers, Gutierrez responded: “Yeah, you should be.”

As Nazario left his car, he enquired about a supervisor but the racist police officers responded with “knee-strikes” to his legs, then handcuffed and interrogated him, the lawsuit says.

A black named George Floyd was killed in May 2020 by a US police officer, Derek Michael Chauvin, who allegedly knelt on his neck for 9 minutes.