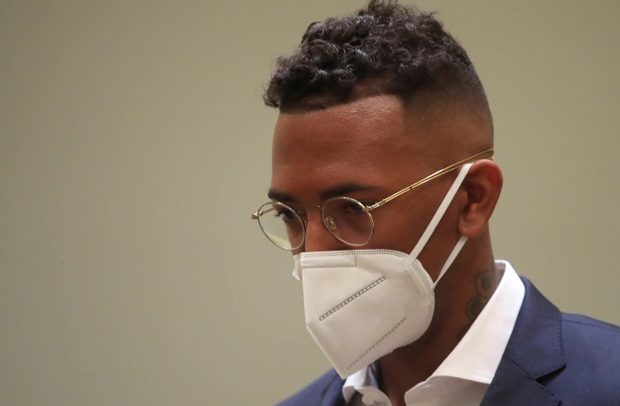 Boateng has denied the allegations

The ex-girlfriend of former Manchester City footballer, Jerome Boateng, has told a German court that he bit her and spat blood in her face and punched her so hard she could not breathe.

Boateng has denied all the allegations made against him, and claims that he was the one who was attacked, telling the court that his ex-fiancée Sherin Senler had become aggressive and insulting towards him, and hit him – injuring his lip.

The World Cup-winning Germany defender appeared in court in Munich on Thursday morning to face the allegations of assault against Ms Senler.

Boateng, 33, is accused of causing dangerous bodily harm to Senler, who is the mother of his twin daughters, in an incident in 2018 while they were on holiday in the Turks and Caicos Islands in the Caribbean.

Wearing a navy suit in the dock alongside his lawyer Kai Walden, the former Manchester City and Bayern Munich defender appeared in court to face the allegations levelled against him.

If he is found guilty he could be sentenced to up to five years in prison.

Last year German newspaper Bild reported that Boateng, who now plays in France for Lyon, is alleged have “thrown a small glass candle holder” at Senler while away on holiday.

His representatives have consistently maintained that the accusations are based on unproven claims from a third party.

According to German newspaper Bild, Boateng told the court that when Ms Senler became aggressive towards him, he pushed her away from him, causing her to fall.

He maintained that he did not throw a lantern at her, but rather a pillow against the table. This caused the lantern to fall, he said.

The footballer said the holiday was ‘very nice’ and ‘peaceful’, and that everyone had been in a ‘good mood’ until an argument broke out over a card game.

His girlfriend and one of her friends had accused him of cheating while playing cards, Boateng told the court, with the argument escalating to the point where they were arguing about their lives.

Nobody Can Rush The GFA Into Doing Anything… Randy Abbey Declares