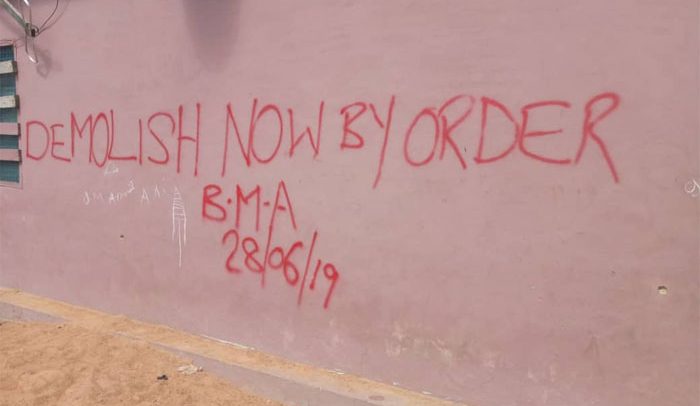 Shop owners in the Upper East Regional Capital, Bolgatanga have rejected a 30-day ultimatum served them by the Bolgatanga Municipal Assembly, to vacate lands they have occupied for over 20 years.

The shops are located along the Black Satellites 92 Road, opposite the Bolgatanga new market.

The shop owners believe the ultimatum is an attempt by the Assembly to bully them.

According to them, the space they are occupying belong to the assembly, but noted that they entered into an agreement with the assembly to build and operate their shops and pay renewal fees every six months.

They again revealed that they have never defaulted in renewing their stay and thought the assembly would consider the agreement before deciding to evict them.

On their part, owners of the land have not sold their lands to the assembly nor the private developer who the assembly is fighting for, and therefore wondered why they have been included in the eviction exercise.

The landlords told DGN Online that the private developer who the Bolgatanga Municipal Chief Executive, Joseph Amiyuure, mentioned as Lesken bought a parcel of land some years ago, but did not include their lands thus questioning the move by the assembly.

DGN Online has learned that the shops and homes are to be pulled down to serve as front view for the private developer’s project.

The home and shop owners therefore urged the assembly not to carry out the exercise without further and proper discussion.

One of the shop owners said “… I have documents covering the space I am occupying and I know my colleagues also have same.

“We don’t know the private developer, but we think that someone has empowered him/her to push the assembly to do the dirty work. If not why will the assembly get up one day and give us this short period to move; move to where?”

Meanwhile, the Bolgatanga Municipal Chief Executive in an interview with DGN Online said there was nothing the assembly could do about the time given the people to vacate.

He however advised them to go to court if they felt their rights have been infringed upon, stressing that the private developer has the necessary documents covering the parcel of land he was claiming.

He further indicated that if the affected persons have something to prove their ownership, they should bring them to the assembly.