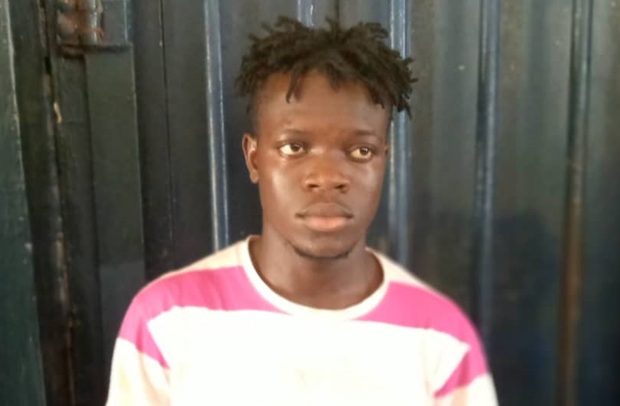 Francis Esson, a 19-year old resident of Effiakuma in the Effia-Kwesimintsim Municipality of the Western Region is in the grips of the police for allegedly stabbing his elder brother, Emmanuel Ato Simpson, 21, to death.

The unfortunate incident which happened on Sunday, occured during a scuffle that ensued between the two.

According to eyewitnesses, the two brothers were spotted earlier on, on that fateful Sunday at a car washing bay at Effiakuma engaging in some verbal exchanges.

The eyewitnesses indicated that it was however, not clear what the issue was about.

They however, claimed that in the process, Francis Esson pulled a knife and stabbed his elder brother in the chest.

Blood started oozing from Ato Simpson’s chest and with help of some people around, he was quickly rushed to a nearby Clinic for medical attention but passed away later at the clinic.

A report was made to the police who visited the scene.

The body of the deceased has since been deposited at the Effia Nkwanta hospital morgue awaiting autopsy and preservation.

Meanwhile, the police had commenced investigations into the alleged murder case.

She said one Christopher Mensah of Effiakuma accompanied by about six boys also from Effia-Kuma arrested and sent suspect Francis Esson to the Effiakuma police station.

Christopher said the victim was rushed to a clinic nearby for medical treatment.

DSP Adiku indicated that the Police then proceeded to the clinic with medical form and found the victim at the ward unconscious with knife wound on his chest.

She said the Medical Officer on duty however, informed the Police that the victim died while receiving treatment.

She said photograph of the body was taken and was deposited at the Effia Nkwanta Regional Hospital mortuary for preservation and autopsy.

The Regional Police PRO noted that the suspect is in Police custody and would soon be put before court.

MOG Music Does Not Support LGBTQI+