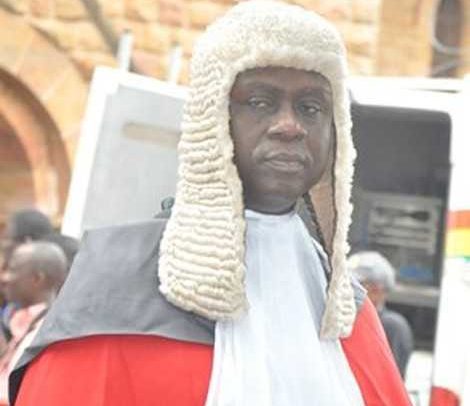 There is no crueler tyranny than that

which is perpetuated under the shield of

law and in the name of justice.

DESTINY HAS PLACED KWASI ANIN–YEBOAH as this country’s Chief Justice (CJ), becoming the 14th Chief Justice; and he was so crowned on Constitution Day, January 7, 2020, a public holiday for the commemoration of the virtues of constitutionalism. But Anin–Yeboah did not attain this position on a silver platter. Ralph Waldo had noted: “The only person you are destined to become is the person you decide to be.” Anin–Yeboah had struggled through life at Toase (Ashanti), Nkroma, Amaniampong Secondary School, Mampong, Apam Secondary School, the University of Ghana, the Ghana School of Law, to be where he is now. He has over thirty-nine years of legal practice, having been called to the bar in 1981.

It is pleasant to note that the creamy ‘crème de la crème’ were present: former Presidents Jerry John Rawlings and John Agyekum Kuffour. Also present were Dr. Mahamudu Bawumia, the Vice President and the two former Chief Justices: Justice Georgina Wood and Justice Sophia Akuffo. Of course, members of the Council of State, ministers and parliamentarians, the diplomatic corps, security capos, as well as the bench and bar, family and friends were all at the ceremony.

In mid-December, last year, Sophia Akuffo was due to say goodbye to the bench, and in order to avoid vacuum, the President, Nana Akufo Addo submitted Anin-Yeboah’s name to the respectable Council of State for advice, in line with the constitutional provisions.

In the ‘Court of Public Opinion,’ allegations were rife, one of which showed the puerile thinking of some persons with diabolical mindset was that Anin–Yeboah’s son had failed the entrance examination to the Ghana School of Law, and for that reason, he had left for the Gambia to do more law. A notable person, a man imbued with sagacity, noted: “This should go to his credit; as a law lecturer, he himself did not lobby for his son’s admission to the Ghana School of Law.”

The Appointments Committee of Parliament subjected the new CJ to a rigorous, comprehensive vetting. The ‘proclivity’ to elicit the best out of the candidate showed in the way Honourable Mubarak Muntaka made references to case upon case and bombarded the candidate with questions. Of course, the CJ should not have expected to be treated with kid gloves.

The new CJ has a heavy task of ensuring that democracy works, and he should bear in mind that “power ought to serve as a check to power.” In the ‘Spirit of Laws’, Baron de Montesquieu (born as Charles Louis de Secondat) described the distribution of political power as: legislature, executive, judiciary (the ‘trias politica’ model), and extolled the society that ensured this ‘Separation of Powers’. John Calvin was also in favour of democracy, and he noted, “It is an invaluable gift if God allows a people to elect its own government and magistrates.”

The ‘Rule of Law’ is a bastion of democracy. Aristotle had written: “It is more proper that law should govern than any one of the citizens.  Upon the same principle, if it is advantageous to place the supreme power in some particular persons, they should be appointed to be only guardians, and the servants of the law.” It implies that a person will only be subject to the law, and the people, including law makers, law enforcement officials and judges should ensure this. Dicey, the British jurist, diving into the history of the legal concept of the rule of law in ancient Greece, Mesopotamia, India and Rome, argued that “no man is punishable or can be lawfully made to suffer in body or goods except for distinct breach of the law.” All these concepts had been embodied in the Magna Carta Liberatatum of 1215 (the Great Charter of the Liberties) prescribed under King John of England.

And our President was right when he remarked at the swearing-in ceremony, “The Judiciary has the onerous responsibility of being the bulwark of the defence of the liberties and rights of our people, and it can only carry out that task well if it has unalloyed respect.” The President was, again, spot-on when he criticized judges who gave rulings (and judgments) without citing any authority, or gave orders without reason.

The new Chief Justice, one hopes, will take good note of all that his predecessors had done while in office and be guided by their firmness and their frailties. He may remember Justice Abban’s ‘Page 28’ debacle with the ‘Free Press’ columnist, Mensah Bonsu, in the case “NPP v Attorney General” (reported in [1993-1994] 2 GLR35, SC). The Free Press had captioned an article “Judicial Chicanery” accusing the bench of being used for “politics of undisguised partisan nature” and as, having “done violence to the truth”. Even though Mensah Bonsu suffered a month in jail and Eben Quarcoo a day, the image of the Chief Justice did not remain the same.

Justice Anin–Yeboah may also be guided by the Aremeyaw Anas’s: “Ghana in the Eyes of God” of September, 2015, that allegedly exposed corruption within the judiciary. Under this so-called ‘investigative journalism’, court clerks, bailiffs and other court workers were entrapped to connive with respectable judges to influence court cases. As many as 34 judges and magistrates were allegedly caught on hidden cameras receiving inducements of money, goats and food stuff. All these happened at the time Justice Georgina Wood was CJ. Does one need to remind the new CJ to be circumspect in reviewing these cases – in his own domiciliary? Don’t tell us we do not see ‘entrapment’ when there is one.

The new Chief Justice may not engage in “mass production” of lawyers, just like his predecessors, but may be enjoined not to hurt the feelings of the “struggling” students when their case comes before him. He may, please, not add insult to injury by making disparaging utterances, because he had passed through the legal system of Ghana before. He may be passionate about those proposing reforms in the legal education of Ghana because the intention may not be to ‘ruin’ it, but to ‘improve’ upon it.

We know the love the new CJ has for his town, Toase. He should continue to demonstrate the same love to the town. We expect the townsfolk to reciprocate this gesture.

We wish the new CJ, Akwasi Anin–Yeboah a successful tenure. Some of us who know him personally can vouch for his positive principles (uprightness, rectitude, incorruptibility, honesty and integrity), and we trust that he will deliver to the satisfaction of all Ghanaians.

For all those who also had an eye on the position, we say well done for your lofty services. This is not the end of the road. Better luck next time. The Chief Justice, from the hall he was resident in, may remember the priest and poet, John Donne, on ‘The Hill of Truth’: “On a huge hill Cragged and steep. Truth stands and hee that will. Reach her about must, and about must goe.”

New Board For Survey School