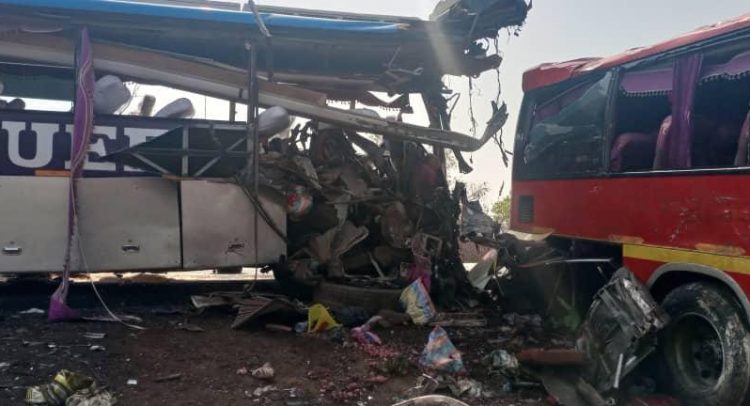 Information reaching DGN Online indicates that 18 passengers have died in a vehicular crash at Buipe in the Central Gonja district of the Savannah region.

Sixteen of the deceased passengers, 12 men, 3 female adults and a girl died on the spot.

Forty five passengers on board the two vehicles sustained various degrees of injury and were rushed to Buipe Polyclinic and Holistic Medicare Hospital for treatment.

Bodies of the deceased have been conveyed to Tamale Teaching Hospital Mortuary for preservation awaiting identification and autopsy.

One Amina, a passenger who survived the accident is heard in a video telling personnel of the Ambulance service that they were coming from Kumasi in the Ashanti region to Garu in the Upper East region.

She indicated that their bus crashed into an oncoming bus from Buipe, heading to Kumasi in the Ashanti region.

The Savannah Regional Police Public Relations Officer, Adjekum Owusu, who confirmed the incident to DGN Online, said on Wednesday, February 3, 2021, dawn, suspect drivers yet to be identified were in charge of Yutong buses with registration numbers GT 3345-16 and AC 1699-20 with about 45 persons on board each of the vehicles traveling from Kumasi to Zebila and from Garu to Kumasi.

According to him, on reaching Sarekyekura near Fufulso on the Buipe – Tamale Highway the two vehicles collided head on resulting in the death of 18 passengers.

He however said efforts are being made to move the accident vehicles to the station and trace both suspect drivers to assist in investigations.

Last week, 11 passengers died while 21 others were in critical conditions following a gory crash at Nasia in the North East Region when passengers were traveling from Kumasi in the Ashanti region to Garu in the Upper East region.