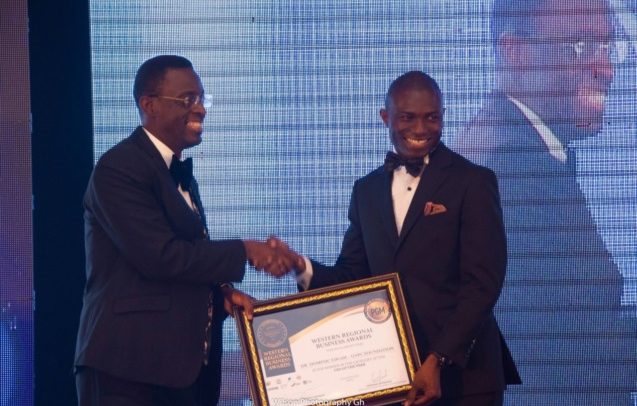 This year’s event, organized under the auspices of the Western Regional Coordinating Council (WRCC), recognized and rewarded excellence across all business sectors in the Region.

In all, about 40 individuals and companies who distinguished themselves in their respective businesses in the year were awarded.

The Ghana National Petroleum Corporation (GNPC) Foundation was awarded the Corporate Social Responsibility (CSR) company of the year while its Executive Director, Dr. Dominic Eduah emerged as the Chief Executive Officer of the year.

The Excellence in Cocoa Processing Company of the year went to the West African Mills Company (WAMCo), a cocoa processing company based in Takoradi.

In his address, the Western Regional Minister, Kwabena Okyere Darko-Mensah stressed that the region believed that businessmen and women continue to fund the nation and so they needed to be recognized and celebrated.

“So we are celebrating the achievements, of our cherished entrepreneurs and businessmen and women who have attained exceptional levels of business excellence.

“These individuals have distinguished themselves with outstanding management practices to champion innovation, bring out the best in employees, and deliver superior performance”, the Minister pointed out.

He noted that even though the country is facing some economic challenges, businesses must not be swayed from achieving what they can internally to support the people.

“As a Government, we are committed to promoting and supporting local businesses to succeed”, he added.

He challenged businesses to take advantage of the various policies and initiatives by the government that seek to address sustainability in terms of improving entrepreneurial skills.