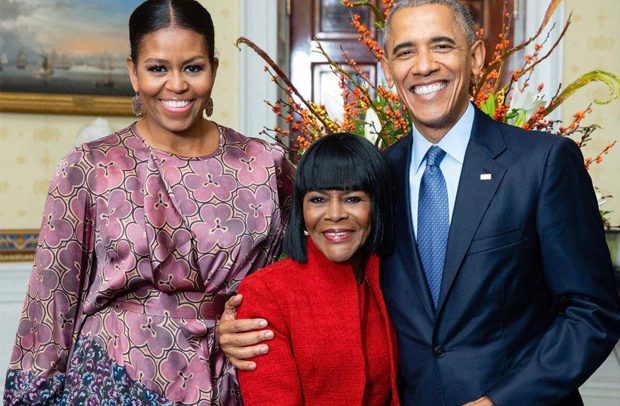 Hollywood actress Cicely Tyson – who was known for portraying strong African-American characters – has died aged 96, her manager has said.

No cause of the death was given. The former fashion model had a career that spanned seven decades.

Tyson won two Emmys for her performance in the 1974 civil rights-era film The Autobiography of Miss Jane Pittman.

She also became the first black woman to take on a main role in the TV drama East Side/West Side in the 1960s.

Presenting Tyson with the Presidential Medal of Freedom in 2016, the then US President Barack Obama said that apart from her achievements as an actress, she had also shaped the course of history.

Tyson turned down stereotypical roles for black women, agreeing only to play characters that were strong, positive and realistic.

“I have managed Miss Tyson’s career for over 40 years, and each year was a privilege and blessing,” her manager Larry Thompson said in Thursday’s statement announcing her death.

“Cicely thought of her new memoir as a Christmas tree decorated with all the ornaments of her personal and professional life. Today she placed the last ornament, a star, on top of the tree,” the manager said, adding that she died peacefully. Tyson’s memoir Just As I Am was published on Tuesday.

Paying tribute, US broadcaster and actress Oprah Winfrey said: “She used her career to illuminate the humanity of Black people. The roles she played reflected her values; she never compromised.”

Tyson recently told CBS interviewer Gayle King: “I had no idea I would touch anybody.”

Michelle Obama added she would “miss her dearly”, saying: “I smile knowing how many people she inspired, just like me, to walk a little taller, speak a little more freely, and live a little bit more as God intended.”

Tyson was nominated for a best actress Oscar and Golden Globe in 1973 for Sounder, about a family of poor black sharecroppers in the midst of the Great Depression in 1933 Louisiana.

The Tony Awards also nominated her in 2013 for lead actress for the play The Trip to Bountiful, about an unhappy, elderly woman desperate to visit her girlhood home before she dies.

Tyson also appeared in 2011 film The Help and TV shows including How to Get Away with Murder, which starred Viola Davis, and House of Cards. Oscar-winning actress Davis said Tyson had “made me feel loved and seen and valued in a world where there is still a cloak of invisibility for us dark chocolate girls.”

A Good Leader Has The Positive Personal Trait Called Faith