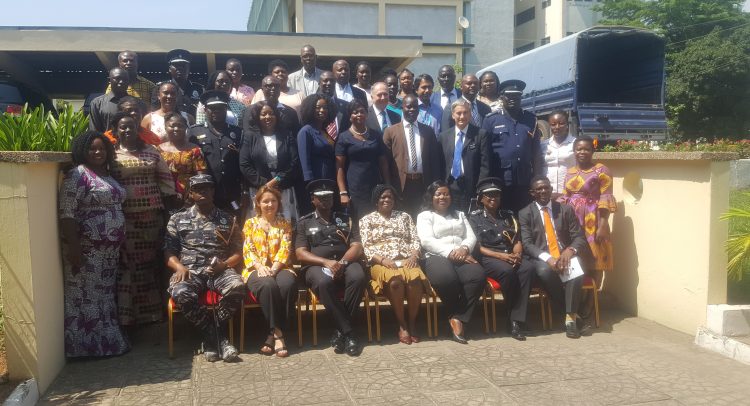 COP Prosper Agblor, COP Maame Yaa Tiwaa Addo Danquah, other members of the police management board in a group photograph with Adelaid Annor Kumi and other stakeholders represented at the launch

The Domestic Violence and Victim Support Unit (DOVVSU) of the Ghana Police Service have launched the 20th anniversary of its establishment at the police headquarters in Accra.

Speaking at the launch, the Minister of Interior, Ambrose Dery, in an address advocated for zero tolerance for violence against women and children in the country

Dery whose speech was read on his behalf by Madam Adelaide Annor Kumi, Chief Director of the Ministry of Interior said violence against women and girls (VAWG) was the most widespread form of abuse worldwide, affecting one third of all women in their lifetime.

“Discrimination against women provides an authoritative explicit picture of how the continuum of different forms of gender-based violence affects women throughout their life cycle; and it is often exacerbated by cultural, economic and political factors like displacement, globalization, militarization and violent extremism.”

He revealed that violence against women and girls takes many different forms, including domestic violence, sexual assault and harassment, child/early and forced marriage, sex trafficking, so called ‘honor’ crimes and female genital mutilation.

The Inspector General of Police, James Oppong Boanuah, whose speech was also read on his behalf by Commissioner of Police, Prosper Agblor, said the police administration was considering a proposal by DOVVSU officials to make the unit a directorate as part of its 20th anniversary.

He said having metamorphosed from Women and Juvenile Unit (WAJU) to DOVVSU, the emphasis on arrest had also been replaced with victim support.

He revealed that DOVVSU was created in 1998 as a specialized unit for victims to boldly lodge complains of abuse against them and had since been doing well.

He commended stakeholders for their support in ensuring that victims get support and justice.

The Director General Of The  Criminal Investigation Department (CID), Commissioner of Police, Maame Yaa Tiwaa Addo Danquah, in an address said the focal areas of DOVVSU includes public education on issues of domestic and gender based violence, empowerment of women and children with respect to their rights, bringing perpetrators of domestic and gender based violence to book, supporting victims through counseling and working with other stakeholders to meet the needs of victims though building of effective support systems.

She revealed that as part of its commitment to providing credible information on SGBV and child related offences, DOVVSU assists the country with reliable statistics to be able to respond to the request from the international community.

Present at the ceremony were representatives of UNICEF, UNFPA and other stakeholders and members of the police management board.

The occasion was also used to commission the refurbished DOVVSU crises response center at the police hospital annex.