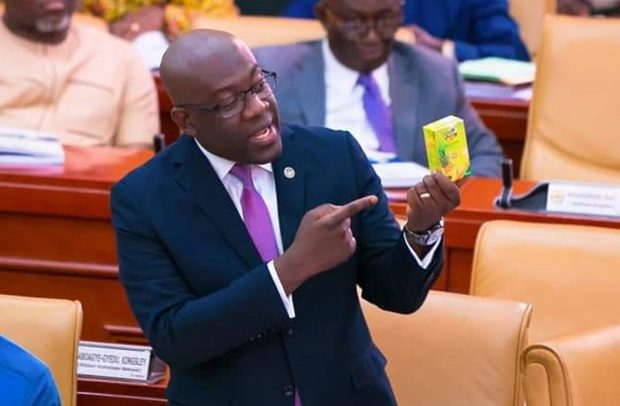 There was excitement especially among Majority MPs in Parliament on Monday when the now popular Ekumfi Fruit Juice product known as “Eku Juice” popped up in Parliament during the 2020 budget debate.

The Minister for Information and MP for Ofoase Ayirebi, Kojo Oppong Nkrumah, displayed the well packaged juice while contributing to the budget debate, focusing on the benefits of flagship programs introduced by President Akufo-Addo.

The Pineapple Juice from the Ekumfi Juice Factory is under the government’s One District One factory program.

Mr. Nkrumah told the House many of the flagship programs of the Government, including the factories under the 1D1F were yielding results.

“When we rolled out the 1D1F Program, there was a lot of mockery but that flagship program in addition to the stimulus package that was provided is beginning to bear fruit. I hold in my hands here Eku Juice from the Ekumfi Juice Factory soon to be rolled out onto the market. Another project of the Akufo-Addo administration in the Central Region which was subjected to so much ridicule, but today that flagship program is beginning to bear fruit” he said.

The $8 million project which officially commenced in March 2018 now has 400 workers including out-growers.

It is estimated that the Ekumfi Juice Factory would create 5,000 direct out-grower jobs within the community and its environs.

The factory can process about 300,000,000 packs of juice annually for the local and export markets and would generate close to GH¢530 million in revenue.