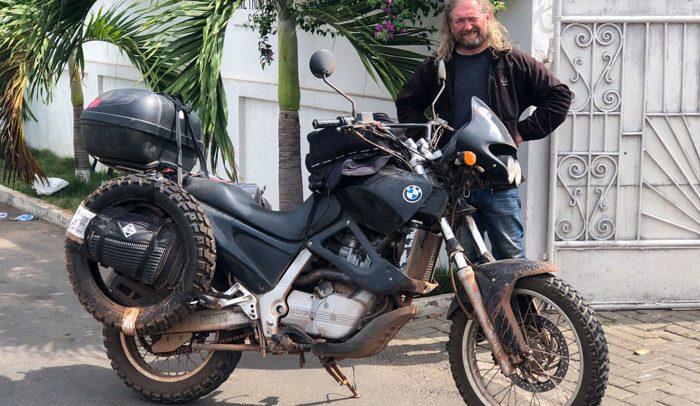 Robert and his 600cc BMW motorbike

A 50-year-old German, Robert Mionskowski, has done what many will think is a crazy adventure.

He has ridden on a BMW motorbike from the German city of Hannover to Accra – a daredevil mission that took him three weeks.

Robert told DAILY GUIDE that his son is a volunteer in Volta Region’s Vakpo, for which reason he decided to visit him using a motorbike for the trip.

“Riding a motorbike gives me a sense of freedom,” he disclosed.

He said he started from Hannover to Spain, Gibraltar then to Morocco and Mauritania – both in North Africa. He eventually reached Senegal, then Ivory Coast and now Accra, he said.

“When I was a kid, my family of three had only one bicycle. Neighbours asked me whether I would like to ride and I responded in the positive. I love the freedom of riding. Before this trip, I used to ride to Italy from Germany. I was told about the dangers on the way but the people I have met have all been friendly. When they realize the mission I was on they were friendly and helpful. Soldiers and residents were all friendly in Africa. Their conduct was different from what I was told before I embarked upon the trip. I did not witness any of the corruption stories I was told were rife along African borders. People asked me to come and pass the night in their houses,” he narrated his story to DAILY GUIDE.

Embassy staff who learnt about his mission when he went seeking entry visas were fascinated about what he wanted to do and did not hesitate to affix the approval stamp on his passport.

Robert lodged at the Agoo Hostel near the DAILY GUIDE office – a location frequented by tourists. Asked whether he relied on GPS, he said no, adding “I rather relied on a map”.

He asserted that he would ship the motorbike back to Germany as he flies back home after a successful mission to Ghana by road.

His volunteer son was happy to see his father accomplish his mission.