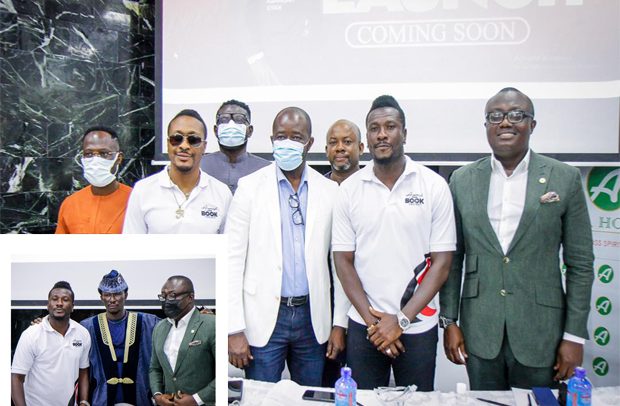 His illustrious football, music and business careers have stirred the football chief to describe him as the best sporting icon ever.

At the former Sunderland and Rene striker’s press launch for his upcoming book launch, the FA President pointed out that the former Black Stars captain had assumed legendary status in his diverse field of endeavour, and should be accorded that respect.

He told the gathering at the Alisa Swiss Spirit Hotel in Accra on Wednesday that “Gyan is the best sporting icon ever, he is peerless. His scoring credentials was phenomenal at all the places he plied his trade.

“I remember he scored 10 goals from 16 games at Liberty before traveling outside. He has distinguished himself for club and country.

“I think what he has done surpasses all, he is the best, that’s my candid opinion.

“His achievements—featuring in seven African Cup of Nations (AFCON) tourneys—are captured in the book, and l encourage everyone to get copies when it is ready.

“At the appropriate time, the FA will thank you in a special way. Your legacy will be patented. With this book and my leadership, we will produce legends like you.

“He has been successful; l will encourage anyone who has the means to document their works to do so.”

Chairman for the occasion, Nana Kwame Bediako, summed up his admiration for the former Udinese forward saying, “I must say Asamoah Gyan is a legend.”

The businessman added, “This book will not only inspire hope, but erase fear among young folks, it is certainly a must read book.”

Gyan, who currently plays for Legon Cities in the domestic league, said the book captured his life story and more. He attributed his exploits to his senior brother, Baffuor Gyan, for blazing the trail.

It will be launched soon in three countries— Ghana – Accra and Kumasi; United Arab Emirates – Dubai, where he endeared himself to many with his scoring prowess; and in the UK.

Publishers of the book have said a fraction of proceeds from sales will go to the Asamoah Gyan Foundation.

Club mate and newly married goalkeeper, Fatawu Dauda, and Emmanuel Agyemang Badu were present to rally behind him.