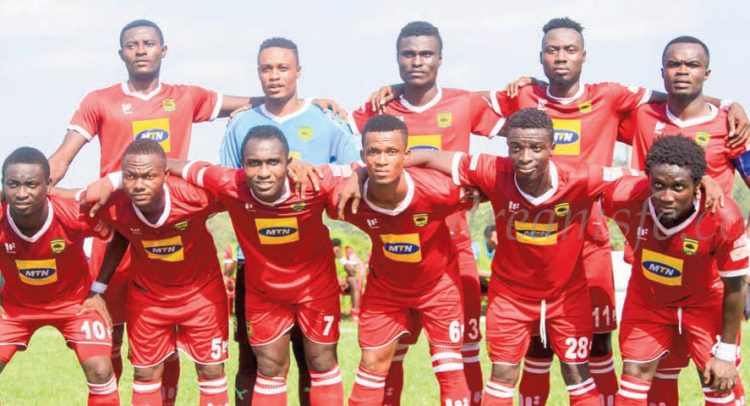 The Ghana Football Association (GFA) Disciplinary Committee has reduced the five home match ban placed on Asante Kotoko to three, DAILY GUIDE SPORTS has gathered.
Fans of the Porcupine Warriors misconducted themselves in their clash against Berekum Chelsea in Kumasi, resulting in a gunshot that led to the shooting of a fan.

That stirred the country’s football governing body to slap a five home match ban on the Kumasi-based side.

But Kotoko accepted their guilt for the misconduct of their fans, and that necessitated the ban reduction to three games, but increased the original fine of GH¢10,000 to GH¢20,000.

”The GFA Disciplinary Committee has ruled that Asante Kotoko shall play three home matches behind closed doors at the Baba Yara Stadium and pay a fine of GH¢20,000 in relation to unsporting behaviour by supporters of the club during their match day 3 encounter against Berekum Chelsea,” a verdict  on the FA’s website stated.

It added, “In deciding the case, the Disciplinary Committee considered the various breaches of the GFA disciplinary code and Premier League regulations as stated in all four charges against the club based on which the prosecutor proffered punishments.

“The club’s plea for mitigation and their efforts to identify and punish anyone found culpable in the acts that occurred at the stadium on the said date was also considered by the panel.”

The verdict stated that Kotoko are to pay the fine within seven days and also handed a three-week ultimatum to provide evidence that it has identified and punished all who were found culpable in the events of the day of which any future decision by the Disciplinary Committee will consider the club’s inability to discipline their fans as stated in their reply to these charges.

According to the panel which was chaired by the Chairman of the Disciplinary  Committee, Osei Kwadwo Esq., the club’s commitment to support efforts that will instill discipline in the league and their regret for the actions of their supporters which clearly breaches the GFA Premier League regulations and disciplinary code also influenced its decision to reduce the punishment.