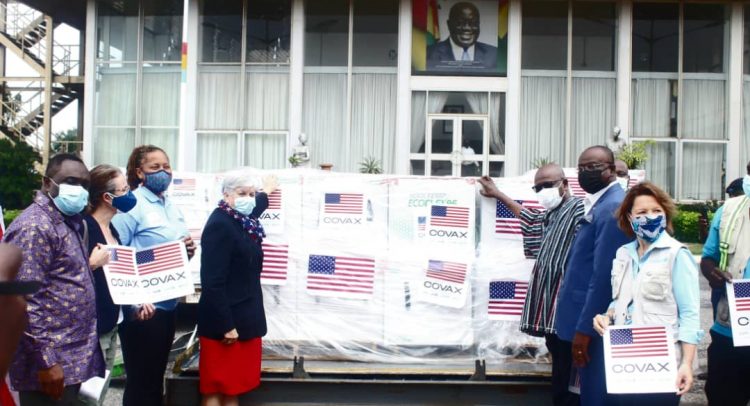 U.S Ambassador Stephanie Sullivan and Mahama Asei Seini in a symbolic handing over of the Moderna vaccine.

The Ministry of Health (MoH) today, September 4, took delivery of 1,229,620 doses of Moderna vaccine from the U.S government.

The vaccine doses were made available under the COVAX facility with logistics and transport support from UNICEF, which serves as an implementing partner of COVAX (CEPI, GAVI, WHO).

U.S Ambassador to Ghana, Stephanie Sullivan, in her remarks at the Kotoka International Airport(KIA) where the handing over ceremony took place said the donation builds on the decades of partnership the health sector between the two countries.

She said since the beginning of the Covid-19 pandemic, the U.S government has contributed more than $30 million to the country’s response.

“The United States government is committed to leading the global response to the Covid-19 pandemic and accelerating global vaccine distribution as the world’s largest single donor to COVAX,” she said.

Ambassador Sullivan said vaccination along with other preventive protocols will help control the pandemic and slow the development of the new variants.

“As President Biden has said, the United States is committed to bringing the same urgency to international vaccination efforts that we have demonstrated at home. We will continue to do all we can to build a world that is safer and more secure against the threat of infectious diseases,” she stated.

Deputy Minister of Health, Mahama Asei Seini on behalf of the government received the vaccines saying

Mr Mahama Asei Seini, during the presentation, reiterated the government’s efforts put in place to attain herd immunity in its fight against the pandemic.

He said the Moderna vaccine from the US Government will increase the range of Covd-19 vaccines available and further bolster efforts to protect more people from the virus.

On September 2, the government received additional 244,800 doses of the Johnson & Johnson Covid-19 vaccines through the African Vaccine Acquisition Trust (AVAT). 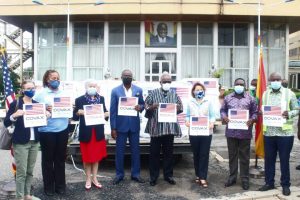 This is after the Akufo-Addo-led government in August, procured 177,600 doses of the Johnson & Johnson vaccine from the aforementioned body.

The Ghana Health Service (GHS) immediately began administering the Johnson & Johnson vaccines in places identified to be hotspots in all regions across the country.

Approximately, 155,000 vaccines were administered in the Greater Accra and Ashanti Regions.

Also, the Service started administering 1.5million doses of AstraZeneca vaccines received from Germany in all 16 regions to individuals who took their first shot between March 10 and March 29, this year.

That vaccination exercise is expected to end today, September 4.