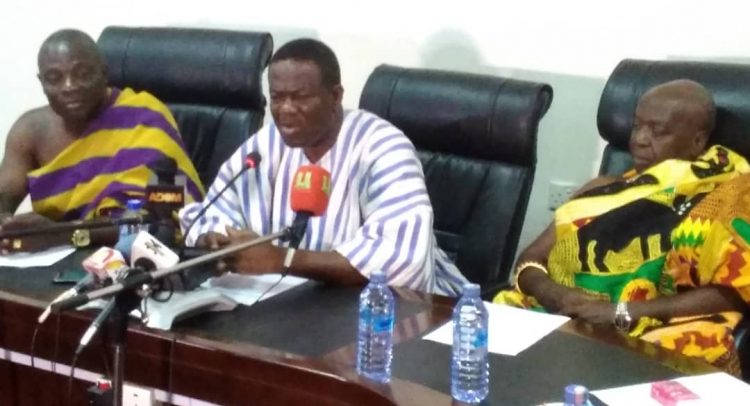 A MEETING to take inputs from citizens and other stakeholders for the implementation of government’s Community Mining Programme (CMP) has been held at Obuasi, with the call on traditional rulers to support the project.

Minister of Chieftaincy and Religious Affairs, Samuel Kofi Dzamesi, who made the call, said CMP is the best form of mining to directly offer employment to indigenous people and boost local economies of communities.

President Akufo-Addo, in July this year, launched the Community Mining Programme at Wassa Akropong in the Western Region.

At least, one community mine, which is expected to employ over 4,500 people, will be set up in each of the mining districts in the country.

The miners are to be trained at the University of Mines and Technology (UMaT) in Tarkwa at the cost of the state as part of the programme, the Minister stated.

Paramount Chief of Adansi Traditional Area, Opagyakotwere Bonsra Afriyie II, thanked government for its vision, but cautioned it against the invasion of foreigners into the Community Mining Programme.

According to him, it is the desire of Nananom to see that the CMP will a preserved for Ghanaians alone, particularly locals resident in the host communities.

In his view, the involvement of foreigners, who mostly have the financial mussels, would push away the local people.

He also wants government to protect young people and children of school-going age so they do not engage in mining at the expense of their education.

District Chief Executive (DCE) of Adansi Akro from, Jonas Maurice Woode, who spoke on behalf of the MDCEs, said over 40,000 youth had registered for the CMP.

According to him, President Akufo-Addo is expected to inaugurate the programme on November 15, noting that insurance packages have been added to the programme since mining involves accidents.

Fulani Students To Get Cuba Scholarships