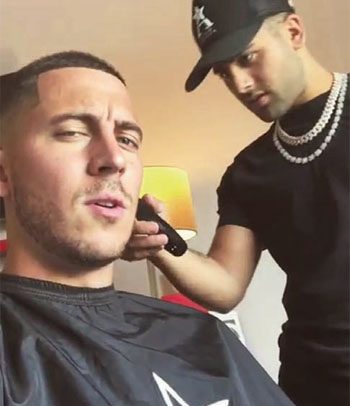 Eden Hazard brought British barber Ahmed Alsanawi to Brussels for a fresh trim ahead of his unveiling at Real Madrid  yesterday.

The former Chelsea star, who signed for Real in a deal potentially worth up to £150million last week, is now ready to be paraded in front of the fans for the first time.

Hazard called upon the British-based A-Star Barber for a fresh trim while on international duty with Belgium in Brussels.

Alsanawi documented his journey to mainland Europe on his Instagram story, before posting a video filmed by Hazard during his haircut.

In the video, the barber asks Hazard if he is ready, to which the player replies: “I’m ready”.

His move to Real Madrid is likely to be one of, if not the biggest of the transfer window, as Zinedine Zidane looks to significantly improve his squad.

The Bernabeu giants have already brought in Eder Militao, Rodrygo, Luka Jovic and Ferland Mendy, taking their summer spending up to an incredible £344m already.

Hazard’s old side Chelsea, meanwhile, are currently under a two-window transfer ban, meaning they cannot replace their influential forward for a year – pending an appeal.

Hazard, with his fresh haircut, was expected to pose alongside his new No 7 shirt at Bernabeu last night when he was unveiled in front of the media.

Real will roll out the red-carpet treatment for the winger when he is officially presented. The Belgium star became the club’s record-signing when his £150million move from Chelsea was finally concluded last Friday.

All Set For Kwesi Nyantakyi Hearing