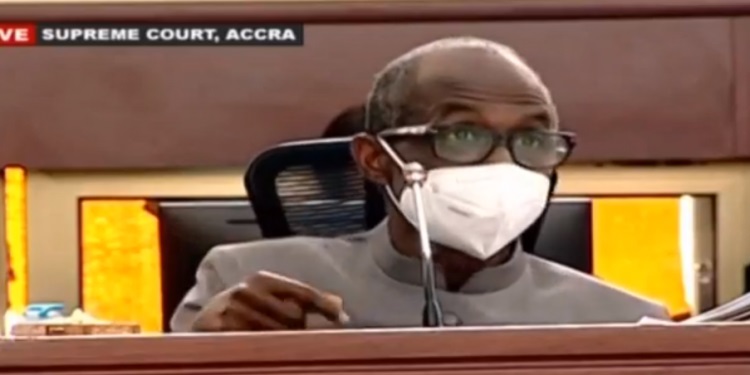 The General Secretary of the National Democratic Congress (NDC), Johnson Asiedu Nketia, yesterday told the Supreme Court that he was not the one who filed a petition before the court challenging the results of the 2020 Presidential Election.

Mr. Nketia, one of the two witnesses that the petitioner, former President John Dramani Mahama who was the Presidential candidate of the NDC in the election, is relying on for his petition, made the categorical statement under cross examination by the lawyer for the Electoral Commission (EC), Justin Amenuvor.

He had tendered a witness statement which was adopted by the court for him to rely on as his evidence-in-chief.

Mr. Amenuvor asked Mr. Nketia issues relating to the results of the election and the fact that the petitioner was aware of the correct results as well as those from Techiman South when he filed his petition, hence could not rely on wrong figures.

The witness, however, told the court that he was not the petitioner and could therefore, not answer those questions.

He at a point even said in court that “I do not know why you seem to be confusing me with the petitioner,” as he was subjected to barrage of questions by the EC’s lawyer.

The court, prior to the cross-examination, had struck out seven paragraphs of Mr. Nketia’s witness statement because the issues raised were not part of the petitioner’s (Mahama) pleadings.

Lawyers for the EC and President Akufo-Addo who are the first and second respondents respectively, had urged the court to strike out portions of the witness statement because they said those issues were not relevant to the case.

The lawyers had argued that the allegations contained in some parts of the witness statement did not form part of the case former President Mahama pleaded in his election petition before the court.

Akoto Ampaw, lead counsel for President Akufo-Addo, argued that the statements were prejudicial to the trial and extremely scandalous.

It is the argument of the lawyer that those do not form part of Mr. Mahama’s pleadings as he did not in anywhere in his case challenge the collation of results.

Tsatsu Tsikata, lead counsel for the petitioner (Mr. Mahama) in his response noted that the petition made allegations of bias and unfairness on the part of the EC and it was those matters that had been addressed in the witness statement.

There was drama in the courtroom when lawyer for the EC took his turn to cross-examining Mr. Nketia whose witness statement had then been adopted by the court after expunging some averments from it.

When confronted by questions relating to the total valid votes and the votes obtained by the 12 candidates in the election, he indicated that he would have to calculate.

In an attempt to indicate that he will need calculator to do the computation, he stated that “they have taken all our phones,” making those in the gallery burst into laughter.

The legal team of President Akufo-Addo then presented him with a calculator and as he began imputing the figures, he could be heard saying the calculator is not working, drawing more laughter in the courtroom.

Mr. Nketia in his witness statement made several allegations of irregularities against the EC during the conduct and declaration of the 2020 Presidential Election.

He made allegations of vote padding in some constituencies in favour of President Akufo-Addo, who according to the EC won the election.

It is his case that the action of the EC Chairperson, Jean Adukwie Mensa, was contrary to the dictates of the constitution which enjoins her to act fairly and unbiased.

Mr. Amenuvor then challenged the witness about the figures he was relying on in his witness statement.

The lawyer put it to him that at the time of filing his witness statement, he (Mr. Nketia) knew the total votes obtained by President Akufo-Addo and Mr. Mahama and also knew the difference between the votes obtained by the two main candidates.

Mr. Amenuvor put it to Mr. Nketia that even if the alleged figure of 4,696 of padded votes was added to the votes of Mr. Mahama, it would not make any difference in the over 500,000 votes difference, adding that President Akufo-Addo would still have won the election.

But the witness objected and told the court that the petitioner was not before the court claiming that he had won the election but to challenge the constitutionality of the acts of the EC Chairperson in declaring the results and whether she complied with the provisions of the constitution.

He also added that the figure of 4,696 was just a sample of the vote padding that occurred and did not represent the entire figures they were questioning, adding that “they are just samples and not the population.”

The lawyer then put it to him that if that was what the petitioner was seeking, then he was in the wrong court but Mr. Nketia declined to answer that.

Akoto Ampaw, lead counsel for President Akufo-Addo, also began his cross-examination by asking the witness whether he remembered that prior to the declaration of the EC, the NDC had held series of press conferences to announce what they thought was the outcome of the election and he said “yes.”

The lawyer then asked whether he remembered that at some of those press conferences the NDC had announced to the whole world that Mr. Mahama had won the election and Mr. Nketia said that was not contained in his witness statement.