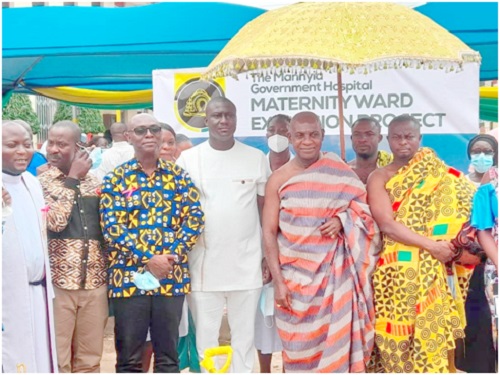 The dignitaries at the event

The JOBergandOtumfuo foundations havecut the sod for the expansion of the MahyiaGovernment Hospital maternity wardin Kumasi, in the Ashanti Region.

The GH¢440.000 project, to be undertaken by JOBerg Ghana Construction, the mother company of JOBerg Foundation, would increase the bed capacityat the maternity ward from 15 to 50,when completed.

At a ground breaking ceremony to commence the construction of the ward,JOBerg Foundation President,Joseph Magnus Marteye,pledged to complete the projectwithin the stipulated timeline of 10 months.

He said JOBerg Construction would provide expertise, technical support and general construction works at their own cost while JOBerg Foundation wouldcontribute GH¢150,000 in cash to the project.

The chairman of the board of the Otumfuo Foundation, Nana Professor OhenebaBoachie-AdjeiWoahene II said the foundation as the client of the project,would also contributeGH¢290,000 towards the expansion project.

He further pledged the full support of his foundationand expressed his full confidence and appreciation to JOBerg Foundation for their charity contribution to the Manhyia Government Hospital.

Earlier in the day, the two foundations signed a memorandum of understanding (MoU) to collaborate successfully to complete the project within the time frame.

It is the first time that the two foundations have come together to work on the same charity project in the Ashanti Region.