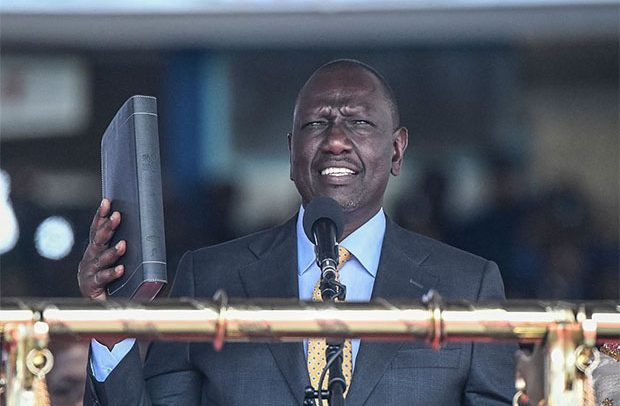 William Ruto has been sworn in as Kenya’s new President at a ceremony held in the capital, Nairobi following his narrow election win last month.

Tens of thousands of people cheered as William Ruto was sworn in as Kenya’s president taking over from Uhuru Kenyatta.

According to report carried by the BBC, Mr Ruto hailed it as “a moment like no other”, adding that a “village boy” had become president.

Defeated candidate Raila Odinga did not attend. He said he had “serious concerns” about his opponent’s victory.

Mr Odinga has alleged that the result was rigged, but the Supreme Court ruled the election was free and fair.

Mr Ruto – the former deputy president – was handed a copy of Kenya’s constitution and a sword to represent the transfer of power from President Uhuru Kenyatta.

With his hand on a Bible, the 55-year-old swore to preserve and protect the constitution.

“Standing here today is testimony that there is God in heaven. I want to thank God because a village boy has become the president of Kenya,” Mr Ruto said, referring to the fact that he grew up in rural Kenya.

He also had conciliatory words for Mr Odinga, and all his opponents.

“Their supporters will be my constituents. I will work with all Kenyans irrespective of who they voted for,” Mr Ruto said.

There was also a handshake between the outgoing Mr Kenyatta and Mr Ruto, his former deputy with whom he fell out during their second term in office.

New Deputy President Rigathi Gachagua said the Ruto administration marked “freedom” for Kenya, and the days when people were targeted because of their association with him “are over”.

Earlier, at least eight people were reported to have been injured in a crash as they jostled to enter the stadium to witness the ceremony.

But inside the crowd was in high-sprits, with frequent cheering, waving of the Kenyan flag, and groups of people proudly wearing yellow – the colour synonymous with Mr Ruto’s campaign.

About 20 heads of state from across Africa attended the event.

Religion was a persistent theme throughout the swearing in ceremony, with leaders from the Christian and Islamic faiths offering prayers for the new president.

Bishop Mark Kariuki said God had showcased his might by elevating Mr Ruto, who was once a road-side chicken seller, to the presidency.

Mr Kenyatta has stepped down at the end of his two terms. He backed Mr Odinga in the election, saying Mr Ruto was unworthy to serve as president.

Mr Kenyatta congratulated Mr Ruto on his win only a day before his inauguration.

Mr Kenyatta said he was committed to a peaceful transition and urged the new president to serve all Kenyans.

In a statement, Mr Odinga said he had received a call from Mr Ruto inviting him to the inauguration, but that he would not attend as he was abroad and he did not believe the election was free and fair.

This is despite the fact that the Supreme Court handed down a unanimous judgment, confirming Mr Ruto’s victory and dismissing Mr Odinga’s concerns that the election was marred by widespread irregularities.

Mr Ruto won after portraying himself as a “hustler” who was challenging an attempt by two dynasties – the Odingas and Kenyattas – to hang on to power.

He promised a “bottoms-up” approach to the economy to tackle the high unemployment rate among young people, and to improve the lives of those less well off.