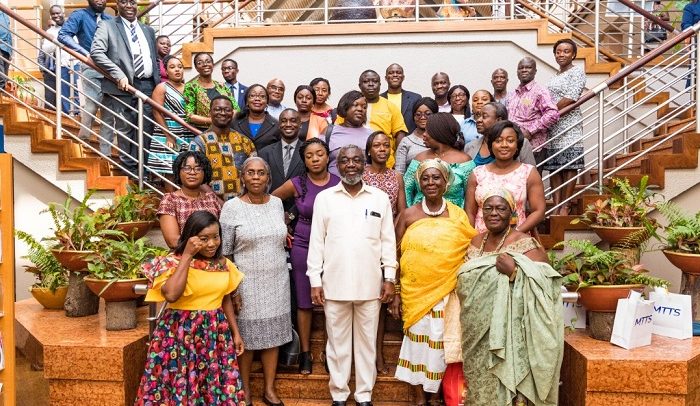 A group photograph of participants at the conference

The figure represents a sharp drop from the condition as compared to 2015 (11 per cent) where the hospital recorded a total of 595 cases of NNJ with 22 diagnoses of acute bilirubin encephalopathy.

She made this known at a Jaundice Awareness Conference organized by Africa Health Supplies (AHS) in Accra.

Mrs. Woode added that NNJ occurred when there was a break down of the red blood cell, infection, enclosed bleeds, enzyme defects and blood group incompatibility (ABO, Rhesus).

Mrs. Tuko Woode urged parents to desist from the practice of resorting to home remedies such as putting children under direct sunlight as against taking children to hospitals for further diagnosis and treatment.

She explained that “NNJ is best treated when detected early which will prevent death and permanent disability with the use of phototherapy machine as well as exchange of blood transfusion.”

He added that “if mothers detect NNJ early, treatment would be given to the child.”

Dr. Asare noted that every district hospital and regional hospital must have laboratory facility to help diagnose and monitor the detection of NNJ.

He added that everybody connected to child health care, especially midwives, nurses and doctors should help detect jaundice for treatment as quickly as possible on the infant.

He also advised that mothers must be educated on NNJ for prevention.

Dr. Isabella Sagoe-Moses, Ag. Director, Family Health Division of Ghana Health Service on her part stated that there was a national newborn strategy and action plan for the year (2019-2023) which was aimed at contributing to the reduction of neonatal mortality rate from 25 per 1000 live births in 2017 to 18 per1000 live births in 2023.

Attack Me With Contrary Records - Bawumia To NDC