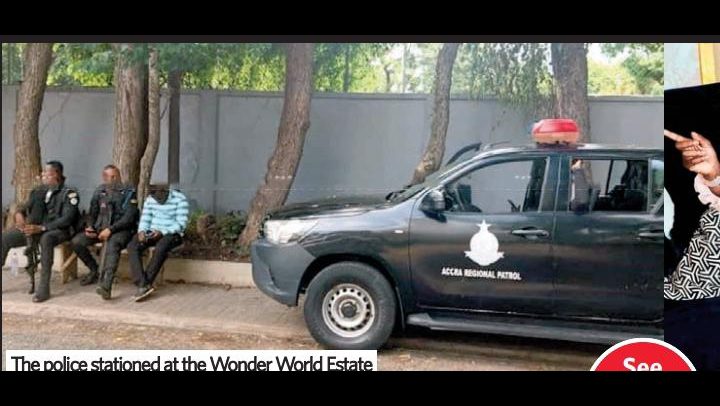 THE ROBBERY suspect at the centre of the Nkoranza riot, it has turned out, was identified through a laptop he and others left behind as they retreated from the crime scene.

The emerging details point out that it was when police officers stormed the crime scene that they chanced upon a tell-tale laptop which had a picture of Albert Donkor, the deceased.

DAILY GUIDE has learnt that it was when the deceased returned to the crime scene on a motorbike to pick up the laptop and other firearms that he met the police.

He was said to have approached the police officers with an offer to assist them unravel the crime, as he told them he lives there and knows the terrain, following which he left the scene.

The laptop, which officers from the regional intelligence unit chanced upon during their combing of the place bore his picture, an important lead in the investigation, especially since it bore his image as home screen, phone decoding software and other tell-tale leads.

Primed with such details, the police officers proceeded to the deceased’s residence at about 2am and confronted him with the tell-tale clues.

He denied being a suspect, adding that he too was a victim of the robbery but managed to escape.
He was whisked away by the police to assist them locate and arrest the other suspects.

Though the circumstances under which the suspect died is still unknown, his family insists their kinsman was not engaged in any wrongdoing as is being alluded to.

After a verbal engagement with the family, the IGP/Dr. George Akuffo Dampare, has dispatched a high-powered team to the area to probe the events leading to the death of the suspect.

Normalcy has been restored to the town of Nkoranza after the attack by the youth on the local police station.

The inmates who were freed by the rampaging youth have been re-arrested after their brief freedom.

Meanwhile, DAILY GUIDE has learnt that as part of measures to avoid further attacks on police personnel stationed at Nkoranza, the police hierarchy has withdrawn all officers, including their families from the community and replaced them with new ones who are currently patrolling the town.

The policemen, their wives and children were seen with their luggage joining private cars at the police station ready to leave the community.

Some of the Nkoranza youth, who watched on while the officers packed their bags and baggage, were heard making comments such as “You better send them away else we go attack them again in their homes, you don’t know us eh! (sic)”

This paper also gathered that the decision by the police administration to withdraw them is to save their lives, because most of them are in rented premises and are known by almost all members of the community. One officer who pleaded anonymity said, “The officers and their families have been whisked away for safety.”

The irate youth last Monday attacked the municipal and district police stations with sticks and stones, demanding the whereabouts of their colleague, Albert Donkor, whom they accused the personnel of wrongly killing on a false charge of being an armed robber.

In the process of the attack, the irate youth freed six inmates who were in cells.

They destroyed properties including police vans and other items. The police with reinforcement from other areas in the region responded with warning shots to disperse them and unfortunately in the process killed an 18-year-old youth, Victor Owusu, and injured seven others.

As a result, a delegation of senior police officers led by COP Christian Yohuno visited the scene to assess the extent of damage to property and put things in order.

Meanwhile, the police have beefed up security in the town, with many uniformed officers patrolling the streets of the town to bring the situation under control.

Nigerian In Court For Murder