‘Make Use Of Free SHS’ 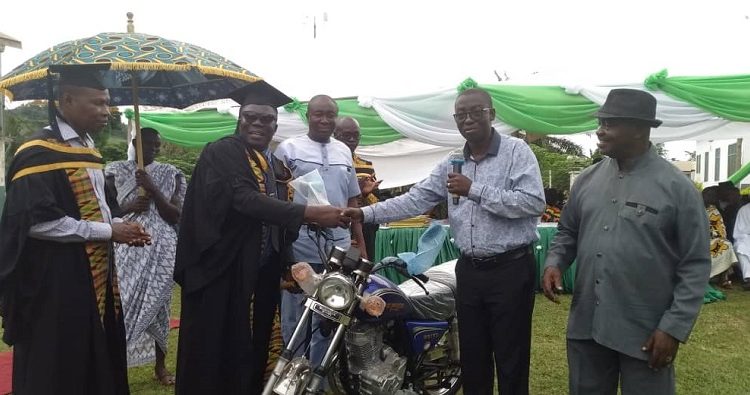 CHIEF EXECUTIVE of the Amansie South District Assembly, in the Ashanti Region, has implored Ghanaian children to see the Free Senior High School policy being implemented by the Akufo Addo government as a great opportunity for them to acquire life-changing education.

William Asante Bediako said the NPP government is very much committed to investing in the education of Ghanaian students, and reminded them of their responsibility to make good use of the opportunity.

“The government is spending so much money and we want you to make good use of the opportunity. We will have ourselves to blame if we relax and play,” he said.

The DCE who was speaking at the maiden graduation ceremony for the final year students of Manso Adubia Senior High School at Manso Adubia recently said President Akufo Addo’s desire is to make every Ghanaian literate.

He said the implementation of the Free Senior High School policy, redefinition of the basic education, extension of the school feeding programme, construction of classrooms and other projects are testimonies of government’s efforts to achieve its set objectives.

The construction of three GETfund projects: one storey girls’ dormitory, a 12- unit classroom block and a canteen with kitchen facilities proves government’s readiness to equip the school with the necessary infrastructure.

Mr. Bediako, who is an alumnus of the school, promised to grant scholarships to best students to pursue tertiary education.

He presented a motorbike to the school for their administrative functions.

The headmaster of the school, Baiden Ofosuhene, who received the motorbike, thanked the DCE for the kind gesture and gave the assurance that it would be put to good use.

He thanked the president, education minister, the DCE and other stakeholders for their concerted efforts to bring relevant infrastructural development to the school.

The headmaster appealed to the government and stakeholders to help complete the boys’ bungalow, and construct a modern dining hall and toilet facilities for both male and female students.

District Director of Education for Manso Nkwanta, Kwabena Owusu, speaking on the theme: “Supporting our alma mater: Old students’ factor,” said that a school cannot make any progress without the corporate and collective support of old students.