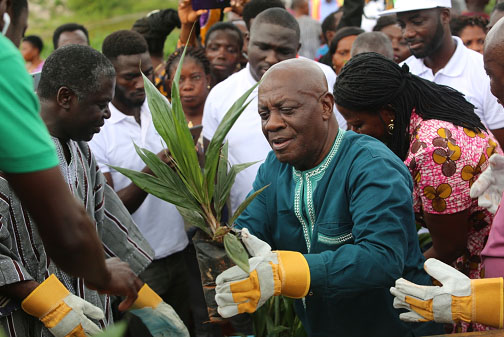 MINERALS COMMISSION has launched its Alternative Livelihood Project (ALP) on Oil Palm to the Eastern Region with the distribution of 600,000 oil palm seedlings to interested beneficiaries including illegal miners.

Launching the project at Akwatiakwa near Adawso in the Eastern Region, the Deputy Minister of Lands and Natural Resources, Benito Owusu-Bio, noted that, the APL on oil palm had become necessary, as it would help people living in mining communities with trade to improve upon their economic lives independent of mining.

He emphasized that the project is also to ensure that mining communities do not become ghost towns even after cessation of mining.

Owusu-Bio informed the gathering that, the ministry has been working with Agencies under it to ensure that illegal mining is curbed in mining communities. Thus, the implementation of oil palm plantations to redirect the energies of the young ones engaged in the illegal mining menace; is one sure way of ensuring sustainable livelihoods that will provide economic sustenance to members of mining communities.

The project targets the preparation of over 10,000 acres of oil palm plantation within the project catchment areas in the region. “These areas cover three administrative districts in the region including: Denkyembour, Abuakwa North and New Abirem, where mining takes place” he indicated.

On his part, the CEO of the Minerals Commission, Mr. Addae Antwi-Boasiako noted that the commission considered the launching of its flagship project on oil palm in the Eastern Region as timely, as will generate employment both direct and indirect through the establishment of agro based industries, which private investors have already positioned themselves under government’s flagship, ‘One District One Factory’, to use the oil palm produce as a feed stock .

He disclosed that till date, over 2,339 beneficiaries had been registered to participate in the programme within 25 mining communities from the three Administrative Districts in the Eastern Region.

Board Chairman of the Minerals Commission, S.K. Boafo in his address, urged the youth to stop the illegal mining practice (galamsey) and instead, register and adopt the project as a more lucrative and less hazardous means of livelihood.

Benito in smock and S.K. Boafo ready to plant a tree at the launch

‘Sex Education Would Have Saved Many From Bad Sex’