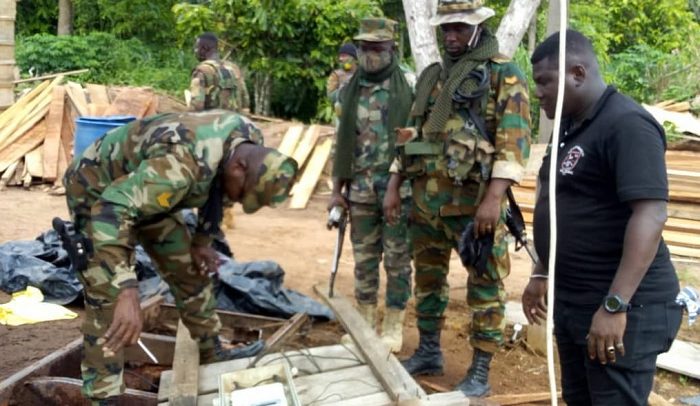 The Forestry Commission taskforce, ‘Operation Halt’, which is currently working in the Ahafo Region to stop illegal chainsaw operators from degrading the forest, reportedly came under heavy attack last week at Dominase, near Bediako, as they carried out their operation.

Those who attacked the taskforce were allegedly led by the Ahafo Regional Minister, Evans Opoku Bobie, who doubles as MP for the area.

There were reports of a number of people wielding offensive weapons such as matches, guns, sticks and stones who attacked the taskforce and prevented  them from closing down an unlicensed sawmill and evacuating illegal lumbers being worked on.

Mr. Bobie, who heads the Ahafo Regional Security Council, was alleged to have  accused the taskforce of trying to deprive his people of  their daily bread and make him (Bobie) lose the 2020 parliamentary election as the MP for the area because of the actions of the taskforce.

The incident prevented the taskforce from carrying out its operations for three continuous days as the regional minister called and instructed the 3BN commander in Sunyani to withdraw the soldiers and not release them for the operation since as the head of the REGSEC he was not aware of their operations.

It took an order from the military headquarters in Accra for the soldiers to be released to the taskforce for the operation to continue at others areas like Ayomso in the region.

The minister reportedly further prevented the taskforce from evacuating illegal lumber to the Forestry Commission premises in Sunyani for legal actions to be taken against owners of sawmills.

“The situation is alarming because just in a space of two days after we returned, we were able to seize 12 trucks of illegal lumber. We have reported the incident to national headquarters and hope actions would soon be taken. We have the backing of the ministry and commission to arrest all illegal operators,” he indicated.

When contacted via telephone, the minister denied the allegation and rather explained that he was on his way to a place called Kasapin when he heard there was a misunderstanding between a sawmill owner and the taskforce, so he only stopped and intervened to cool tempers.

He, however, said as the head of REGSEC, he should have been informed about the operation of the taskforce.