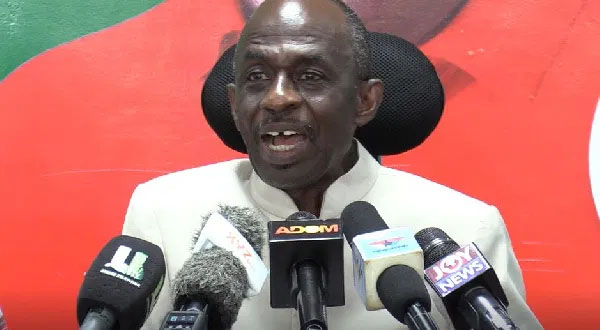 General Secretary of the opposition National Democratic Congress (NDC), Johnson Asiedu Nketiah has rubbished the allegations made by a Vice Chairman of the party, Alhaji Said Sinare that his son, Kwaku Nketiah, has been awarded contract by the Party to print ID cards and take 20% shares.

Alhaji Sinare who was addressing some NDC delegates said, the NDC will be doomed if the delegates make a mistake and elect Asiedu Nketiah as their National Chairman.

Alhaji Sinare further disclosed that the General Secretary has sole-sourced and awarded a contract to a company that makes 20% commission on dues and filing fees collected from NDC members.

The vice chairman alleged that General Mosquito singularly brought in a company of his son to collect dues, issue cards, etc to party members without FEC having a say.

However, Aseidu Nketiah reacting to the allegations in a statement through his campaign team said “While we have refused to comment on the consistent attacks and lies in the past, we have noted the daily lies and the recent one by a National Vice Chairman Said Sinare, claiming among others that the General Secretary, single handedly picked a company and forced it on the Party to provde an eectronic payment platform”.

According to the statement, “We wish to advice that in the supreme interest of our party, all aspirants stick to a campaign of facts and truths, devoid of hatred”.

The campaign team responding to the claims of Said Sinare and the Natonal Chairman said following a decision by the party to set up an eectronic payment patform, Deputy General Secretary Barbara Asamoah was tasked to invite proposals from interested companies, and she was charged to also find out for colleague FEC members if they know any firms with the required Fintech experience to submit their bids”.

“Madam Asamoah is the one who received and submitted a shortlist of the bids she received to a committee, whch was put together to handle Procurements, and chaired by General Secretary, Johnson Asiedu Nketiah”.

Also at the meetings of the Committee, Dr. George Atta Boateng was invited as a consultant to assist with selecting the successful bid for the project. After the review meeting, Madam Barbara Asamoah was the one asked to meet separately with Dr. Atta Boateng to further review and report to the Commttee.

“The Consultant subsequently recommended that the shortlisted companies should submit samples of their proposed work and make presentations to the committee, adding that the Committee after reviewng the reports made its recommendations and submitted
to the General Secretary.

“It was found after the due diligence that one of the shortisted entities was owned by an active senior official of the New Patriotic Party (NPP). How on earth could the NDC have allowed an NPP official to oversee the collection of NDC funds? No way. The other entity is owned by a member of the NDC and who has a security background”.

The statement added that the General Secretary therefore submtted the (Procurement) Committee’s final recommendation to the Functional Executive Committee (FEC).

Additionaly, after FEC’s approval, the Committee met with the Party’s Finance Commttee chaired by Kwame Peprah, who was in charge and negotiated the charges with the selected entity. The Consultant, Dr. Atta Boateng, was also in this meeting to brng his expert knowledge to the proceedings. Also present at this meetng were Barbara Asamoah, Peter Otokunor, Accountant and General Secretary.

“The agreed charges with the selected entity and negotiated by the Finance committee chaired by Mr. Peprah was 18%, and not 20%.

Following the Finance Committee’s negotations, the draft agreement was submitted to the Party’s Legal Committee for review before signing in Juy 2022.

“We want to emphasis that, at all times, it was Barbara Asamoah who received the bids, and submitted the shortlisted entities to the Party’s committee for consideration. Therefore, the aims by the National Vice Chairman, in the presence of the National
Chairman that Mr. Johnson Asiedu Nketiah single handedly picked and dictated to FEC on the selected company are false and shoud be completely disregarded”.

“We note that another member of the Ofosu Ampofo campaign team, Oti Bless of Nkwanta, had also claimed that Mr. Asedu Nketiah and his son are the owners of the said company, and are paying themselves 38% in charges”.

“For the record, neither the General Secretary nor his son has any nterest or shareholding in the company selected and offered the contract to provide the platform. We can campaign for our preferred candidates without resorting to outright falsehoods
and character assassination, which are attributes that are unbecomng of persons seekng to lead the NDC. I am directed by ‘General’ Johnson Asiedu Nketiah to remind all his supporters and the generality of the NDC fraternty that despite the vitrioic attacks on him, and his person by his opposing contestant, we shoud al continue to focus on the issues, campaign for
him for a dynamic, strategic, trustworthy, and fearless National Chairman for Victory 2024” the statement signed by Edem Agbana, a deputy national youth organiser added.