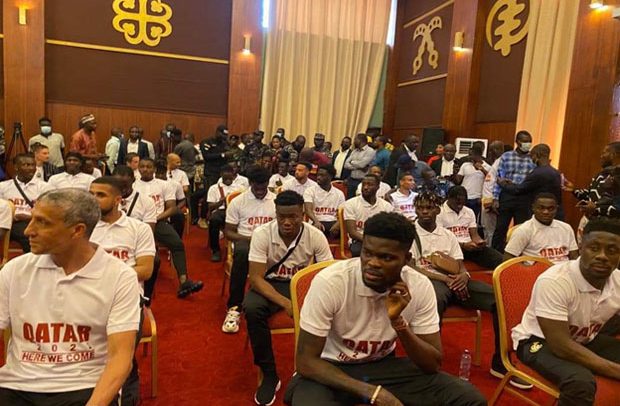 Black Stars at the Presidency

The President, in his State of the Nation’s Address, lauded the Black Stars for qualifying for the Qatar 2022 World Cup in November.

He mentioned that he expects an outstanding performance from the Stars at the Qatar football festival.

The President stated, “Their qualification has brought so much joy to Ghanaians, and we’re looking forward to an outstanding performance in Qatar.”

Ghana qualified for the globular event at the expense of their perennial rivals, Nigeria, in Abuja on Tuesday evening, after a 1-1 draw game.

Earlier in Kumasi on Friday, the Super Eagles held Otto Addo’s men to a scoreless game.

But the Ghanaians took their destiny into their own hands, demonstrated bravery, and skipper of the side, Thomas Partey’s early strike, which was later cancelled, was enough to seal the qualification on the basis of the away goal rule.

Meanwhile, it has emerged that the World Cup draw would be held tomorrow, at the Doha Exhibition and Convention Center (DECC).