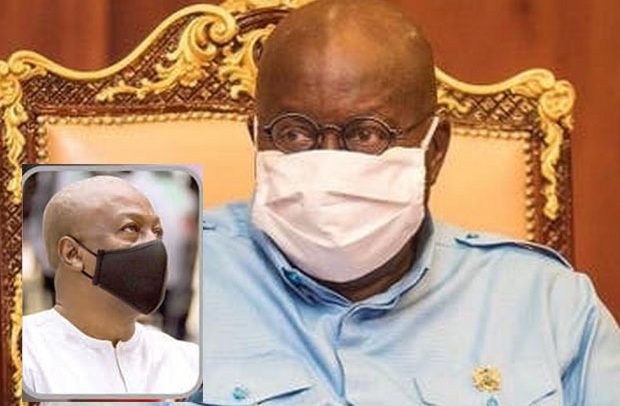 In this regard, President Akufo-Addo has stated that Mr. Mahama has no moral justification to label the current New Patriotic Party (NPP) administration as incompetent.

He said he had never displayed incompetence like his predecessor, Mr. Mahama.

During the introduction of his running mate, Mr. Mahama tried to create the impression that the Akufo-Addo administration was incompetent, but the President had fired back that nobody can challenge the NDC flagbearer with regard to incompetence.

“You are the worst performing president of Ghana for the past 30 years and you have the audacity to label my government as incompetent,” he said on Kumasi-based Wontumi Radio over the weekend.

According to him, the economy was in tatters and the country was heading into a ditch when the NPP administration assumed the mantle of leadership on January 7, 2017.

President Akufo-Addo then blamed Mr. Mahama for the poor state of the country, accusing him of mismanagement.

“The worst statistics of our country’s economy was managed by former President Mahama, who was only good at displaying gross incompetence all over. He left behind an economy with a growth rate of 3.4 per cent and total mismanagement in all sectors of the state and that shows how incompetent he is,” he pointed out.

President Akufo-Addo said Ghanaians were lucky that the NPP won political power at a time when the country was on the brink of collapse.

He reiterated that the NPP administration inherited a country that was in a mess and so he wonders why Mr. Mahama is now trying to push his famous incompetence tag on him.

According to him, it is a fact that his administration has performed excellently in less than four years unlike the erstwhile Mahama government.

President Akufo-Addo, who tackled a number of pressing national issues during the interview, said truly the NPP government was delivering.

For instance, he said the NPP, which boasts of a lot of seasoned economists and intelligent people, had managed to bring renaissance into the economy and the state.

The President stated that the hopeless state that Mr. Mahama and the NDC left behind in 2016 is no more there, as the NPP administration had remarkably delivered.

On the upcoming elections, he said the electorate would vote massively for the NPP to enable it to sustain its achievements for the country.

“Ghanaians would speak on December 7, and it will be an emphatic victory for the NPP and myself, so that we can continue to lead our country on the path of prosperity,” he stressed.