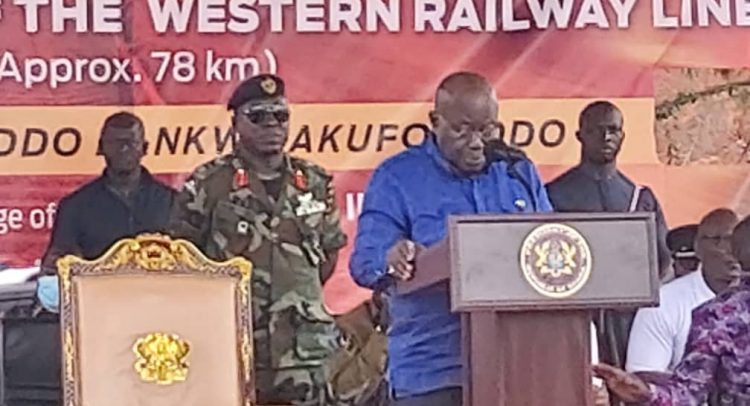 President Akufo-Addo has warned persons who are engaged in stealing railway tracks and other properties belonging to the company to desist or be made to face the law.

He said the acts of these miscreants are thwarting the government’s efforts in revamping the railway sector in the country.

“Apart from illegal mining which has a negative impact on the development of the right of way leading to the high cost of construction, some unpatriotic saboteurs in our communities have chosen to steal components of the railway system including the tracks”.

“I want to sound a strong word of warning to those perpetrating these acts that the law will take its course when arrested and the appropriate sanctions will be meted out to them”, the president noted.

The President gave the warning when he cut sod to mark the commencement of the Manso to Huni Valley part of the Western Rail Line yesterday.

The project will be executed by Amandi Investment Limited with funds from a Deutsche Bank Credit Facility secured by the Government of Ghana and would be completed within 42 months.

The Manso-Huni Valley line would be on a standard gauge and it forms part of the development and reconstruction of the entire western railway line.

The western line which starts from Sekondi-Takoradi to Kumasi was constructed in 1903 and is the major route for the transportation of minerals and other bulk commodities such as cocoa, bauxite, manganese, cement, flour, and petroleum products.

The President said one of the great tragedies of the country’s post-colonial era was allowing the Railway infrastructure bequeathed to the country by the colonial masters to deteriorate completely.

The President said upon assumption of office in 2017, he was determined to change the statistics because he believed that the presence of an efficient railway system was critical to the country’s progress.

“Today’s sod cutting is a clear manifestation of the Akufo Addo’s government’s policy of developing the country’s railway system”, he added.

He noted that in recent times, the railway sector has received considerable investment.

He stressed that the government was committed to providing the necessary support to expand and modernize the railway infrastructure to help improve economic activities.