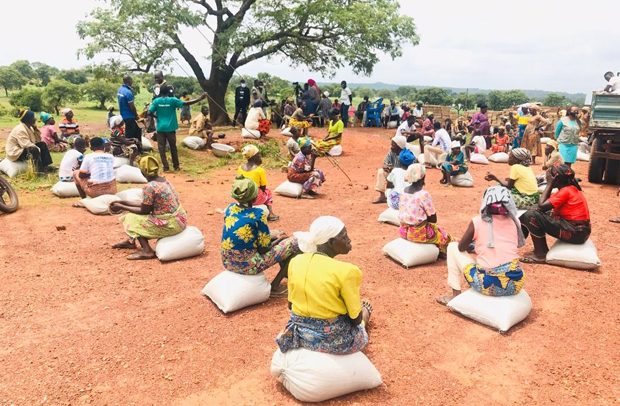 A philanthropist and founder of Yennutoona foundation, Roxanne Hill-Konlan, has supported over 1000 women in conflicted affected communities in the Bunkpurugu district of the North East Region.

Widows, physically challenged and aged women from various communities in the district benefited from the support.

They received food, fertilizers, cashew seedlings and financial support to help them establish and expand existing businesses to cater for their families.

It is estimated that over 10,000 households will benefit from the support.

About 70 houses were burnt down completely in the conflict resulting in the killing of the Sayeegi Chief and his son.

In 2016, fresh clashes erupted in the then Bunkpurugu-Yunyoo District in the Northern Region between the Jamon and Jafouk clans over the legitimate occupant of the skin in the area, forcing residents to flee from the town with their families.

Lives and properties were lost as a result of the clashes between the feuding factions which brought severe suffering and poverty in the district.

The two families later performed a blood burial to institute peace and unity among both families.

The blood burial which is a tradition performed between two families coming into an agreement to cease hostilities and live in harmony is done by sacrificing sheep, cows, dogs and some other animals to cleanse the land.

Mr Roxanne Hill-Konlan told DGN Online that there is severe hunger and poverty in the district after the conflict reason why he decided to feed the vulnerable and the needy in the district every year.

“Some of them sleep 2-3 days without food and this is real.”

He thanked the Nakpanduri, Binde and Bunkpurugu chiefs for the peace restored in the area.

Mr Konlan appealed to the people of the Bunkpurugu district to ensure that the current peace in the area is sustained to help rebuild the affected communities.

The Assemblyman for the Nakpanduri South thanked the philanthropist for the gesture adding that the support has helped the various communities.

The Paramount chief of Nakpanduri, Naba David Kansok commended Mr Konlan for his philanthropic works in the area and called on sons and daughter of the Nakpanduri-Bunkpurugu district to help rebuild the district after the conflict.

“He has been of a great benefit to this district supporting in the area of education, health, vulnerable people and as you know the going is tough and so his support is greatly appreciated by all and I encourage him to keep up the good work.”

The Bunkpurugu Chief Alhaji Abuba Nasimong appealed to the youth not to take the law into their hands and ensure that the current peace in the district is sustained for them to benefit from government developmental projects.

He praised the Yennutoona foundation for the support to various communities over the years and called on other son and daughter of the district to come back home and help rebuild the district.

‘You Don't Run Kotoko And Lose’