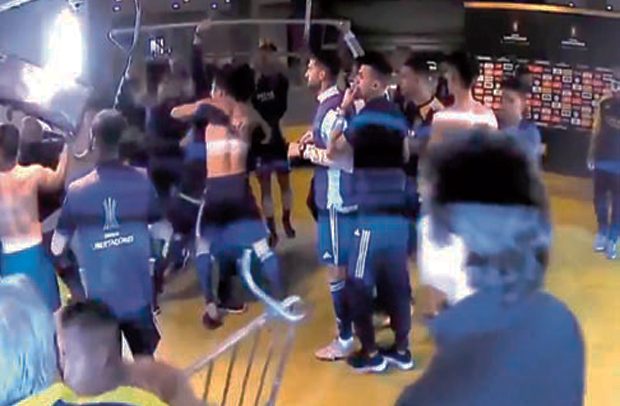 The riot caused chaos in the tunnel after the match

Police were forced to use pepper spray to prevent Boca Juniors players from entering the Atletico Mineiro changing room following an ugly brawl after their Copa Libertadores game on Tuesday.

Atletico won 3-1 on penalties in Belo Horizonte to progress to the quarterfinals of the competition after a 0-0 draw in both legs.

Players and staff from both sides clashed after the final whistle and scenes in the tunnel and the changing rooms were captured on cameras.

No arrests were made but police used pepper spray on Boca players that had tried to storm into Atletico’s changing room.

Boca vice-president Juan Roman Riquelme defended his players and said: “Of course the players were going to defend themselves if they had pepper spray thrown on their faces.”

The Brazilian club said Boca players and staff had “invaded” their locker room, where the match officials had sought refuge.

“After the game, the Boca players went down the tunnel and went to the visiting dressing room.  A few minutes later, the Argentine delegation left the headquarters and, in a blockade, went to the referee’s dressing room.

“Mineiro’s security guards tried unsuccessfully to contain them. The Argentinians then decided to invade the dressing room, where there were players, delegates and members. Even president Sérgio Coelho tried to prevent the invasion to protect Atlético’s professionals,” Atletico said.

Eight Boca members, including five players, were identified by police during the brawl and the entire Boca delegation was escorted by authorities to the nearest police station to give their account of events before returning to their hotel in Belo Horizonte.

“After a long negotiation, mediated by President Sergio Coelho, the Argentine delegation went to the police station to register an incident report for looting of property and aggression.

“No one will be arrested, the outcome was of injured people, fortunately not serious,” Atletico said.

CONMEBOL have yet to comment on the incident but the two clubs are expected to face punishment.

You Are Cushioned By Glico… Hasaacas Ladies Told