Promoting Peace Between Christians and Muslims In Ghana 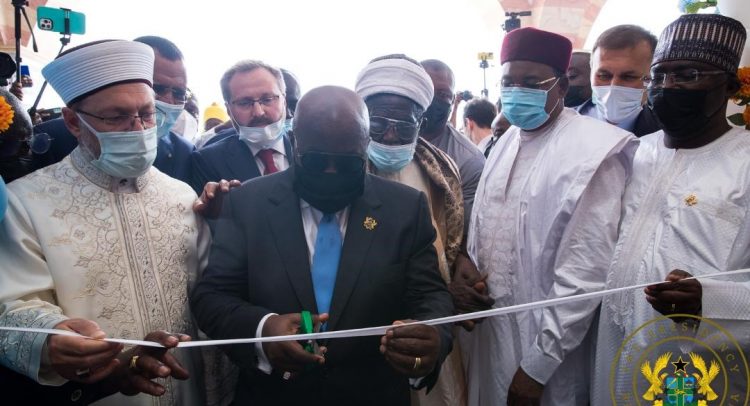 The Bible advocates peaceful coexistence as it exhorts believers in these words, “You shall not hate your brother in your heart, but you shall reason frankly with your neighbour…You shall not take vengeance or bear a grudge against the sons of your own people, but you shall love your neighbour as yourself” (Leviticus 19:17-18). The Lord Jesus emphasized that loving God and our neighbours is the greatest commandment.

Prophet T.B. Joshua teaches that a person’s neighbours include those who do not share the same faith with him or her. This means differences in faiths should not serve as catalyst for religious conflict or oppression. Ghana’s Vice President, Dr. Mahamudu Bawumia, a Muslim recently expressed delight over peaceful Christian-Muslim relations in Ghana, describing it as enviable religious tolerance.

The Vice President was speaking at the commissioning of the National Mosque in Accra recently. The 5000-capacity Mosque complex described by Mrs. Gina Blay, Ghana’s Ambassador to Germany as hybrid in her Twitter post, was funded by the Turkish Government. Surprisingly, however, the imposing Muslim edifice was commissioned by a Christian.

President Akufo-Addo commissioned it with a host of Christian leaders and the diplomatic community; they were not only there to grace the occasion but also to support and deepen interfaith relations in Ghana. According to a media report, “Dr. Bawumia observed that the sight of a Christian President commissioning a national mosque, with Christian leaders in attendance, showed the special nature of the country Ghana.

“We thank the Almighty Allah for this country, Ghana. It is a very special country. It is a country where a sitting Christian President will come to commission a national mosque. That is a very special country that we have,” a media report quoted Dr. Bawumia as saying. He continued, “…Here we are, Muslims and Christians; with the Christian clergy – they are here in their numbers. This is Ghana, the country of peace and the country of religious tolerance.”

Interestingly, the Christian community in Ghana is also building its multi-purpose National Cathedral in Accra. And Vice President Bawumia is looking “forward to the day when Muslims in the country will also join their Christian brothers to commission the National Cathedral.
Christianity and Islam are two different faiths even though both are often described as Abrahamic.

A conversation between two prominent Nigerian opinion leaders regarding peaceful Christian-Muslim coexistence is a necessary reminder to all Ghanaians. Dr. Nnamdi Azikiwe, a Christian and political figure from Nigeria’s predominantly ethnic Igbo Eastern region once reportedly had an historic communication with Sir Ahmadu Ballo, the Sarduna of Sokoto, Premier of Northern Nigeria.

Making a comment on the two leaders’ discussion, in an article, Majeed Dahiru writes, “Ahmadu Ballo and Azikiwe could not reach an agreement on whether to forget or understand our differences, they failed to appreciate the similar plurality of our colonial masters that deliberately coalesced in a British identity”

Misunderstanding theological and ideological differences between Christianity and Islam can be a potential source of conflict between them. Also, factors such as enmity and rivalry, competition, suspicion, superiority and mistrust can potentially trigger violence between the two faiths in Ghana and elsewhere.

Even a misunderstanding leading to erroneous remarks about one religion’s faith can be a recipe for inter-religious conflict. For example, in 2016, a Christian leader, Bishop Nicholas Duncan Williams came under barrage of verbal attacks from the Muslim community when he made uncomplimentary remarks against Muslims.

Clearly, though Muslims and Christians cohabit and relate peacefully in Ghana, cases of conflicts, confrontations and mockery do arise between them.  But one thing is certain that the Christian and Islamic faiths have come to stay in Ghana and Africa in general. This does not, in any way, suggest that factors or negative practices including polemical preaching, religious discrimination and favouritism which trigger conflict between them should be fostered and encouraged.