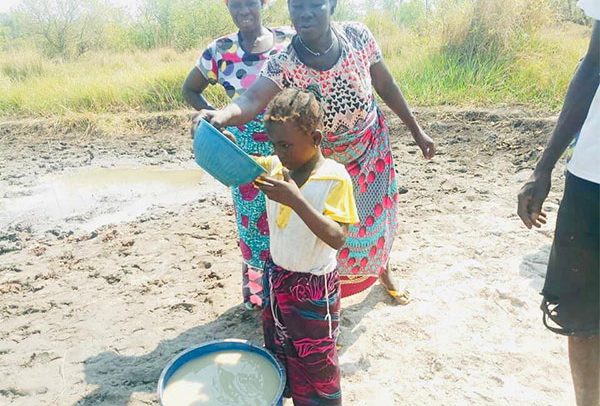 Residents of Kulbonduly , a farming community in the Central Gonja District of the Savannah region, have resorted in drinking dam water due to the lack of potable water in the community and its surroundings.

The Kulbonduly community with a population of over 700 inhabitants , have been compelled to drink and use unhygienic and untreated water for their daily activities from the community dam which can cause an outbreak of water borne diseases.

The dam, the community’s only source of potable water which is almost dried up have compelled chief and opinion leaders to task the youth of the community to guide the dam 24/7 to prevent animals from draining the already dried up dam community members share with the animals.

Some residents especially women who spoke to DGN Online said when their only source of water dried up they walk about 5km each day to nearby community to fetch same dam water for survival.

“ we have been drinking this dam water for years and that is not our fault because we do not have access to potable water. We know it’s not healthy to drink the water in its raw state but that’s all we have .” They said

They appealed to government , NGOs, philanthropists to come to their aid to provide them with potable water.

The Assemblyman for the Yapei Yapala Npeereso Electoral Area, Mr. Jakpa Matinu told DGN Online that the water situation in the area severe and needs urgent attention from government.

“ I have tried severally to lobby at the assembly and through to the Member of Parliament for the Yapei/Kusawgu but it did not yield any positive result .”

He revealed that the chiefs and opinion leaders in the community have decided to come together and organize a communal labor with Motoking tricycles to travel to Yapei which is about 10kms from Kulbonduly to fetch potable water for community temporarily since the dam their only source of water is almost dried up.

The assemblyman appealed to individuals, institutions to provide the community with boreholes, wells for them to get access to potable water.

The Sustainable Development Goals (SDGs) VI, which Ghana is a signatory to, talks about ensuring available and sustainable management of water and sanitation for all.

The global effort to achieve sanitation and water for all by 2030 is extending beyond the household to include institutional settings, such as schools, healthcare facilities and workplaces.

The existing Damongo Water Supply System is based on water abstraction from an irrigation dam. However, since 2005, the plant has not been in operation due to siltation issues, resulting from unfavourable climatic conditions. This situation has, thus, led to inhabitants of Damongo having to resort to private hand-dug wells and boreholes fitted with hand pumps for their water needs.

It is believed that the completion of the Damongo Water Supply Project will bring lasting solution to the water crisis problems in the Savannah region.