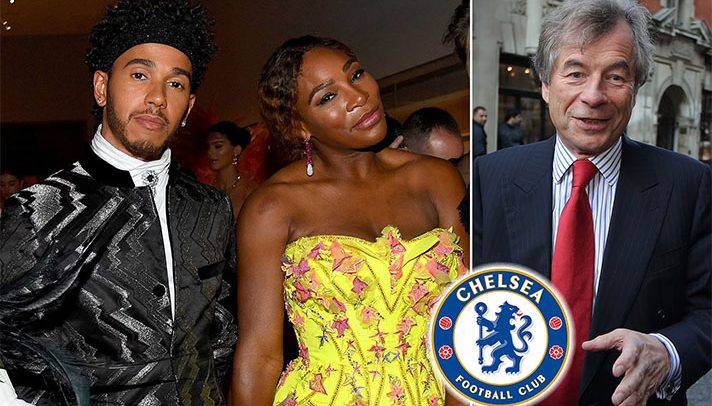 According to Sky News, the seven-time Formula One champion and the 23-time Grand Slam winner are ready to pledge £10million each to the deal. Chelsea is expected to be sold for around £2.5bn.

Broughton, the former chairman of British Airways and Liverpool FC, has apparently been in talks with the duo for weeks.

Hamilton has previously spoken of how he supports Chelsea’s London rivals Arsenal, and has been a fan since he was five years old.

Sky News also claim that Hamilton would “play a formal role in Chelsea’s future efforts to promote diversity, equity, and inclusion” if Broughton’s bid ends up being successful.

Chelsea, the current Champions League holders, have been up for sale since March – shortly before Russian owner, Roman Abramovich, was hit by sanctions from the government due to his ties to Russia President Vladimir Putin.

Raine Group, the bank who is overseeing the Chelsea sale, could pitch their preferred bidder to the government as soon as this week.

Broughton, who is spearheading the bid, is a lifelong Chelsea supporter, and has a wide range of investors to raise funds.

Hamilton, 37, has spoken openly of his Arsenal fandom on several occasions. In 2018, when legendary coach Arsene Wenger announced he was going to leave the club, Hamilton said in an interview with Sky Sports: ‘I’ve had the privilege of meeting him a couple of times.

“He asked me to go and train with the team, which I have not managed to do yet, but he was always really welcoming, and it was cool to meet ‘our team’s’ boss. I’ve supported Arsenal since I was five.”

And in 2020, he revealed how his friends keep him up to date with Arsenal’s fortunes, if he can’t watch a game due to his racing schedule.

“I have been watching Arsenal play for a long time, being with them through the highs and lows. If I can’t keep up with the game, then my best friend will call me every day, to give me all the updates,” he said.

Chelsea and Arsenal played each other in the Premier League on Wednesday night at Stamford Bridge, with Arsenal winning 4-2. It was the first Chelsea game where only season ticket holders and away fans were allowed into Stamford Bridge, as part of the sanctions placed on Abramovich.

The 40-year-old Williams, meanwhile, is a part-owner of Los Angeles based women’s team Angel City who will play their first match this year.

“I think that’s really cool for athletes to own something. It’s interesting, because you have a different type of pride when you’re there and you’re playing for something that you own,” Williams said of her involvement in an Instagram live session with actress Natalie Portman, who is also a part owner of Angel City.

“It’s not really done in tennis, so it’s really interesting to have an opportunity to do that in a different sport. It would be a wonderful feeling to have that. You want to play better, to play harder – not only are you playing me, you’re playing me in my stadium,” she added.