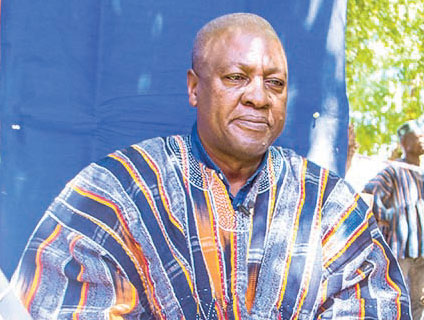 THE Bono East Regional Secretary of the New Patriotic Party (NPP), David Boakye, has recounted how the erstwhile National Democratic Congress (NDC) government under John Dramani Mahama introduced the payment of utility bills and university students were made to pay light bills.

He said as student leader in 2013, the Mahama administration made campus life ‘hell’ for students and some of them had to lead the charge to calm tempers.

Mr. Boakye, who is a former SRC President of the University of Cape Coast (UCC), said until the NDC policy, every government was solely responsible for the payment of the cost of utilities used in tertiary institutions.

“Under John Mahama, tertiary students paid utility bills, which policy Nana Akufo-Addo abolished for students upon coming to power. How can we trust Mr. Mahama with our vote?” he quizzed on Wontumi TV in Kumasi recently.

Using letters to buttress his point, he recounted how the UCC Vice Chancellor at the time summoned him to a meeting as representative of the students and told him that henceforth every student was going to pay electricity bill following a directive from the NDC government.

He pointed out that one of the big men of the NDC, who was part of the UCC council, even “attacked” him at one council meeting for being “all over the place” with the issue.

The Bono East NPP Secretary said the light bill policy was introduced at the time dumsor was rampant, and added that the NDC government circulated a letter to all ministries, departments and agencies across the country that they should include in their budgets the payment of electricity bills and that the government could no longer pay them.

“We tend to forget easily so many things in Ghana. After this, the Ministry of Finance followed up with a letter to the Vice-Chancellors Ghana,” he added.

“As contained in the 2012/2013 budget guidelines, all ministries, departments and agencies as well as metropolitan, municipal and district assemblies were to budget sufficiently for the payment of their utility bills since no centralized vote will be provided for the payment of such bills,” he quoted a letter purportedly written by Patrick Nomo, acting Director of Budget, Ministry of Finance, at the time.

“Further to this directive, MDA and MMDAs were again reminded in the 2015/2016 budget guidelines to budget adequately for the payment of their utility bills and also take steps to ensure the installation of prepaid metres on their premises,” he indicated.

Mr. Boakye said “the NDC government did not end there but added schools to this directive, and I was then the SRC President of UCC. I had a call from the Vice Chancellor and these letters were handed over to me.”

“These letters were written on 17th March 2014. At the time, Prof. Aryeetey was the Chairman of VC Ghana and he received the letter on behalf of his group. Following the directive from the Ministry of Finance as per the attached letter, we would like to inform you that effective January 2014, you are to pay for all your utility bills. However, the Ministry of Finance has agreed to make provisions for the payment of arrears as of December 2013,” he read another letter from the ECG.

He said the letter, which was authored by K. Arthur Forson, acting Director of Customer Service at the ECG, also requested the Vice Chancellor Ghana to make the necessary arrangement to settle their respective university’s utility bills and added that the said letter was received on 20th March 2014.

Mr. Boakye stated that the NDC running mate, Prof. Opoku-Agyemang, was the Minister of Education at the time and she supervised it.