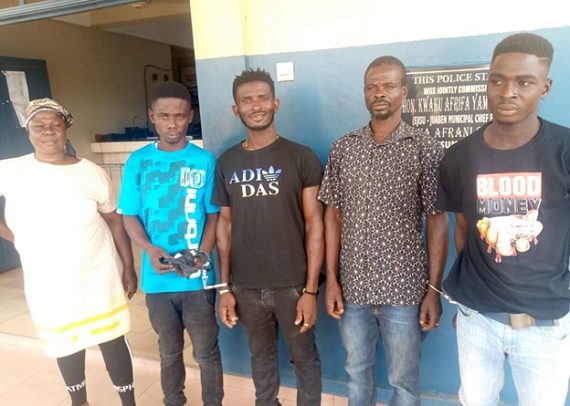 DRAMA UNFOLDED when some five arrested suspects denied ownership of a suspected ‘wee’ substance, found at where they were nabbed.

The suspects, four males and one female, were apprehended in a drinking bar.

But when police interrogated the suspects, all of them insisted that they do not own the 13 wrapped dried leaves, which was hidden in the bar.

The suspects, who are now in police grips and assisting in investigations, are Kwadwo Azor, 49; Kwabena Amponsah, 34; Mushin Dauda, 23;

Prince Osei Mensah, 25; and Elizabeth Agyemang, 32; the only female suspect, who was apprehended.

The five suspects were reportedly arrested in a drinking bar at Yaw Nkrumah near Ejisu, in the Ashanti Region, on June 11, 2022, during a police swoop.

A police document said the swoop, which was organised from 9am to 1pm at some drug peddling ghettos, was to help clamp down on criminal activities.

“In the course of the exercise, the suspects were arrested in a drinking bar at Yaw Nkrumah near Ejisu,” the police report disclosed.

“A search in the said drinking bar led to the discovery and retrieval of 13 wraps of dried leaves suspected to be narcotic drugs. None of the suspects arrested claimed ownership of the exhibit,” the police document sighted by the DAILY GUIDE pointed out.

The report further indicated that the suspects have since been detained for questioning and profiling by police investigators.