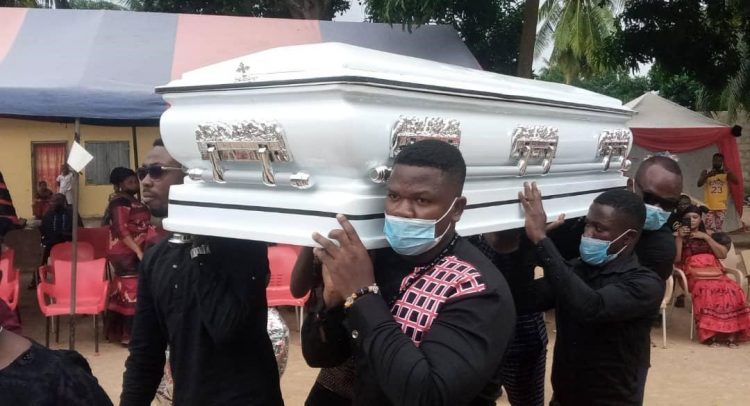 She allegedly died after a physical assault on her by her boyfriend, Philip Caesar Kumah.

Hundreds of sympathisers including; students from the University as well as youths from all walks of life did not hide their last respect and pain as they bid farewell to late Yesutor Akpalu.

He mother could not be consoled after mourners had filed past her daughter’s body.

In a tribute, staff and students of EPUC described the late Yesutor as a student who made meaningful contributions in class and was always attentive.

“She was sociable, kind-hearted, submissive, and was a friend to both her colleagues and staff of the University College,” it stated.

Other tributes from family, the Church, siblings, and friends were read to bid her farewell.

In a message, Pastor Wisdom Ahiagah, from the Lighthouse Chapel International, described the late Yesutor as someone ever ready to render an apology for any wrongdoing.

“I am happy Yesutor received Christ before her departure and we must all allow God to judge her in His own wisdom,” he said.

Uncle to the late Yesutor, Edward Dalmeida, described her death as a big blow to the family as she “was a bread winner in the family.”

She was born on September 30, 1989 at Denu Hedranawo to Abraham Lorlornyo Akpalu (late), and Madam Florence Afi Kumordzi, a businesswoman.

She started her basic education at the Agbozume A.M.E Zion basic school in 1995 and later joined her sister, Patience Gbenyo in Ashaiman, where she successfully completed her middle school.

The late Yesutor after her second cycle education at Some Secondary in Agbozume in 2005, joined the Anagkazo Bible Seminary, where she studied religious studies for 18 months.

After the Bible School, she got admission to EPUC in Ho to study BSc (Hons) Human Resource Management and Organisation.

Until her sudden demise at the Ho Teaching Hospital on March 8, Yesutor left behind a daughter whom she affectionately called ‘Emefa’.

The late Yesutor in March this year, complained of body aches, chest pains, and difficulty in breathing and was later rushed to the Ho Teaching Hospital after which she died the next day while on admission.

The sudden death of Yesutor the GNA gathered, led to the arrest of her boyfriend, Philip Caesar Kumah, also a student at the same university, after he was alleged to have been assaulting the deceased on several occasions.

The body of the deceased was later interred at a public cemetery in Akatsi Gagbakope.
GNA