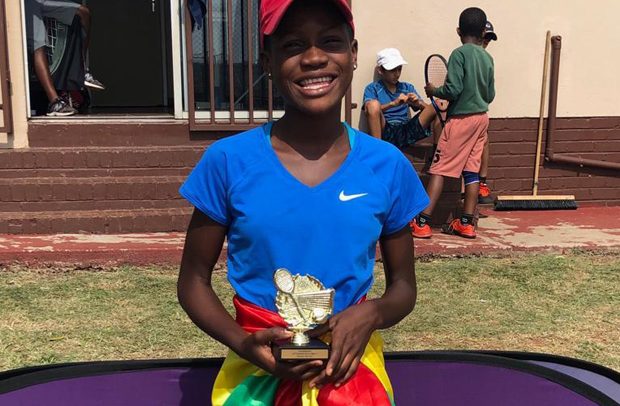 Playing under a temperature of nine degrees for the first time, Tracy met the highly skilled and crafty Karina Pont in the first match, whom she defeated 2:1 on a 10:5 tie break after the first and second sets had ended 4-6,6-4 respectively.

As the sun came up, the Lone Ranger flying the flag of Ghana became energetic.

“At a point, I was down by a set to Karina Pont then all of a sudden my uncle raised the Ghana flag and I don’t know where the energy came from but I managed to turn the event around.”

Tracy then met Alexander Nemeth, whom she defeated in two straight sets.  In her third match, she lost to the number six seed Allegra Van der Walt 5-7,4-6.

In the doubles event, a make shift team of Tracy and Lisa of South Africa progressed to the semifinal having beaten their various opponents in two straight sets in the three matches preceding the semifinal.

Tracy then pitted camp with the Kinetic Tennis Club, where the coaches complimented the efforts of her Ghanaian coach Richard Achagawe by taking her through some of the tough drills needed for a competition.

Learning from the experiences of the first tournament and having got used to the weather, Tracy Ampah entered the Growth Point Atteridgeville tournament with a lot of enthusiasm.

The stage was then set for a titanic final against the number one seed Marise Van Rooyen, but lost 6-2,6-1.

In an interview with ghanatennis.org, Tracy expressed her appreciation to Tennis South Africa for the opportunity, her coach Richard Achagawe, teachers of Umat Basic School, Engineers & Planners and Tarkwa Tennis Club members for funding the trip.

She appealed to corporate Ghana for sponsorship for herself and all the up-and-coming Ghanaian tennis stars to enable them to compete in many tournaments ahead of the ITF team event in Morroco scheduled in September.