Valencia Walk Off Pitch …In Protest Of Racism 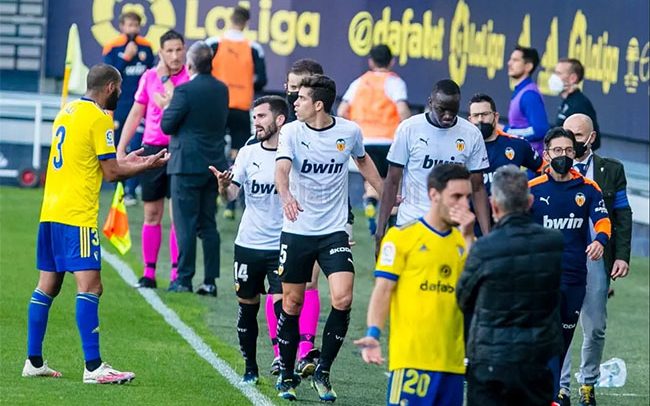 Valencia players walk off pitch due to alleged racial abuse

Valencia players walked off the pitch in the 29th minute of their La Liga clash with Cadiz on Sunday after Mouctar Diakhaby was the victim of an alleged racist comment.

The score was 1-1 when Diakhaby was involved in an altercation with Cadiz’s Juan Cala. Valencia’s Gabriel Paulista then kicked the ball out of play and the players from both sides walked off the pitch.

Following a short break, the players returned to the pitch, but Diakhaby did not return and Hugo Guillamon came on in his place.

“We offer our complete backing to Mouctar Diakhaby,” a tweet posted on Valencia’s page read. “The player, who had received a racial insult, requested that his teammates return to the pitch. We Support  You Mouctar . No To Racism.”

Real Madrid coach Zinedane Zidane condemned racism of any form in the league when asked about the incident on Monday.

“What I can say is one clear thing on racism: zero tolerance. I don’t know exactly what happened yesterday, I wasn’t there, but what I can say is what I feel inside, that’s respect towards people first, that’s the most important,” he told a news conference.

“Zero tolerance for racism… Not just in terms of words, but at every level, all behavior,” he said.

Diakhaby was seen watching the remainder of the first half from the stands.

After the match, Valencia defender Jose Gaya said the team was told to return to the pitch.

“Diakhaby told us he heard a racist insult so we all went off the pitch. We were told that we had to play because if we didn’t they would take the three points off us and maybe we’d be docked more points,” Gaya told Spanish network Movistar.

“Diakhaby asked us to play on, we wouldn’t have done so if he hadn’t done so. He said he wasn’t in the right state of mind to keep playing. He is devastated,” he added.

Referee David Medie Jimenez said in his report that Diakhaby had told him Cala had used a racial slur against him, although Cadiz coach Alvaro Cervera said his player had assured him he had not insulted the Frenchman.