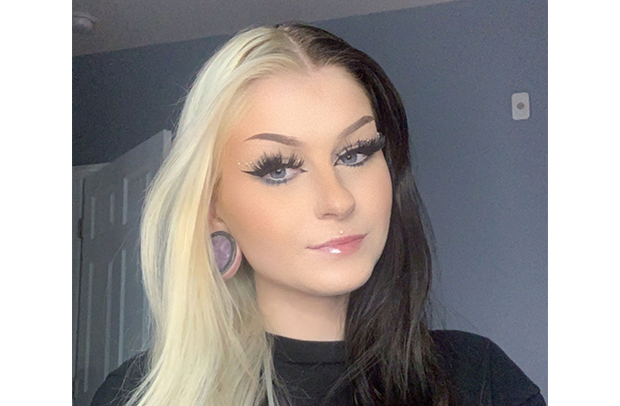 An insurance consultant and psychology student from Colorado Springs, US, Reiley Davis told UK-based Tabloid, The Sun in an interview, “There are times where I have intercourse and if I orgasm I’m in excruciating pain.

“Half the orgasms I have are painful. It’s all pain to the point where I have to take pain relief to get rid of it and it takes about ten minutes for it to go away.

“It feels like I’m getting stabbed 15 times in my abdomen to the point where I have to literally sit in a spot, hold my stomach and hope the ibuprofen kicks in as soon as possible.

“The first time it happened was scary. The doctors told me that it’s probably because I have two uteruses and it’s contracting, doing what it does, when orgasms happen.

“With the orgasms, I’m still dealing with that so there’s a 50/50 chance they do hurt or they don’t, so I just kind of have to go with it. It’s like doing the lottery.”

Reiley discovered she had “uterus didelphys” – otherwise known as a “double womb” – aged 16 during a smear test.

It gave her relief after enduring years of agonising periods which left her doubled over as she felt her abdomen was “on fire”.

Reiley started her period aged 12 and was bleeding every two weeks.

She suffered “excruciating pain” even when she wasn’t on her period, which meant she missed a lot of school.

She said, “My periods were probably the worst pain of my life to the extent I was taking muscle relaxers and ibuprofen every day and I couldn’t go to school as I was literally dreading the pain.

“I went to the hospital quite frequently. It felt like my abdomen area was on fire. It was just hot to the touch, uncomfortable and inflamed.

“It was excruciating to the point it would start swelling and become red because it was so bloated or irritated.

“It was awful and got to the point where I was crying in pain. I would literally have to be on the ground in the fetal position just to get comfortable and not have the pain as bad.

“I remember nights where I’d be lying in bed in so much pain trying to go to sleep. It was just a very hard experience to go through at that young age,” she said.

Reiley said she was put on birth control at the age of 13, three years before her diagnosis, to regulate her periods as they were becoming “too much to bear.”

She hasn’t had one in seven years as a result of her contraception.

However, she returned to the gynaecologist because she was still experiencing extreme abdomen pain and was eventually diagnosed with uterus didelphys.

Reiley said: “The birth control helps a ton with managing my period.

“Throughout the years, I maybe have five instances where I’m in a good amount of pain where I have to take medication, but I’ve made it so my body has adjusted and understands what I need to do.”

Although Reiley has “learnt to live” with her abnormality, there is one complication of her condition which will affect her future.

She said: “I did learn that I have a 40 per cent chance of ever having kids, so that was kind of heartbreaking to me.

“At that young age you don’t even understand it to the full extent, I really don’t even know if I want kids so that’s a weird feeling.

“Now that I’m 21, I have lived with it for a good chunk of time, understand what I’m going through and have a system.”

Reiley claims she’s been told by doctors that her condition means she could become pregnant in one uterus and in the other at a later date, meaning she’d be “pregnant twice”.

It’s very rare for a pregnant woman to conceive again, because their hormones and body prevent it from happening.

But it is possible for women with uterus didelphys to get pregnant with twins – one in each womb.

The odds are one in 50 million – British mum Kelly Fairhurst was one of the very few to experience the phenomenon worldwide, giving birth to twins in April 2021.

Reiley has taken to TikTok to share videos about her uterus didelphys and has been comforted to hear of others with her condition who have had children.

She said: “A lot of people are like ‘oh, I didn’t know that was a thing’ or ‘I have that same condition’ and it was nice to see that I wasn’t essentially alone with this.

“People are like ‘oh my sister had this and she had a kid’.

“It’s nice to know that you’re still able to have children, even though you have a 40 per cent chance, so that made me feel a lot better about my condition if I ever did want to have kids.”

Reiley raises awareness of her condition and has amassed more than 660,000 likes and followers.

She said: “I wanted to make people knowledgeable that this is actually a thing and there are different forms of it.

I’m Not A Ritualist – Fancy Gadam