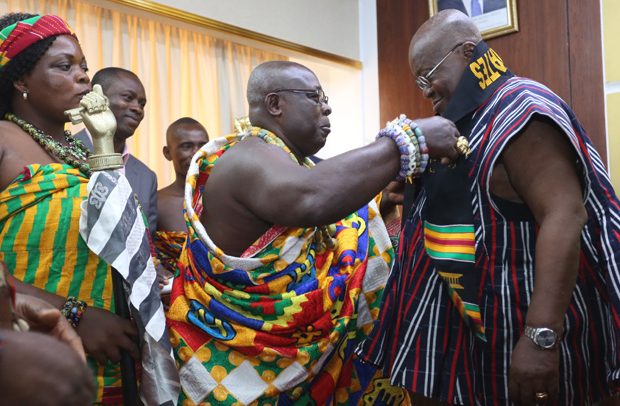 The chiefs and people of Ziavi Traditional Area in the Volta Region have highly commended President Nana Addo Dankwa Akufo-Addo for his efforts towards the development of the country.

The Paramount Chief of the Ziavi Traditional Area, Togbe Kwaku Ayim, who led the delegation to the Jubilee House in Accra on Wednesday also expressed gratitude to the government for granting them a traditional council status and pledged their commitment to support the government’s developmental agenda.

While commending the President for his commitment to ensure a comprehensive development of the country, the traditional leaders presented a number of petitions to him, and appealed to him to help ensure a peaceful atmosphere during the campaign and election period.

On a request by the chiefs for the government’s support to increase the production of a local coffee called “Ziavi Tutui” in their area, President Akufo-Addo said the Ministries of Trade and Industry, and Food and Agriculture would consider their request and give the farmers the necessary support, saying “coffee is one of the areas we want to really pay attention to.”

He urged the Volta Regional Minister, Dr. Archibald Letsa, to develop modalities on how the government could assist the community to produce the “Ziavi Tutui” coffee under the ‘One District One Factory’ initiative.

President Akufo-Addo said he was determined to ensure the December general election is held in a free, fair and peaceful atmosphere.

“I want to assure you that the government is going to do whatever it takes to make sure that the forthcoming campaign and election are conducted in a good atmosphere in our country,” he said.

The paramount chief later honoured the President with a citation for his development efforts, saying “the President’s administration over the past three years has been excellent, but more still needs to be done.”

Yvonne Okoro Rescues Mothers Who Could Not Pay Medical Bills