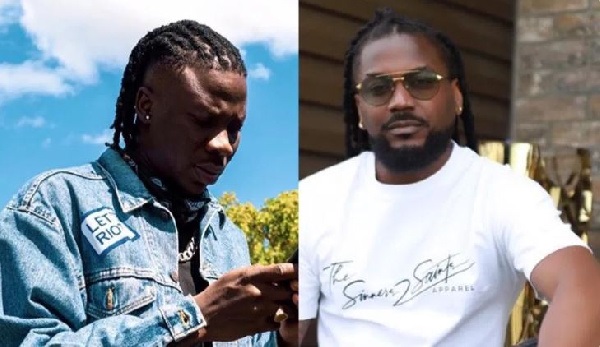 That Nigerians won at the 2021 Grammys is attracting mixed reactions from Ghanaian music stakeholders.

While some are congratulating their colleagues out there for their feat, others are throwing jabs at each other over why Ghanaian current crop of musicians haven’t been able to win for the country.

Two top artistes, Samini and Stonebwoy, on Monday, March 15, 2021, were locked up in a banter over the Grammys.

Stonebwoy’s congratulatory comment to Nigerian artistes, Burna Boy and Wizkid, didn’t sit well with Samini who replied in a manner Stonebwoy also didn’t appreciate.
“With all due respect, let all other African nations give it up for Nigeria, for their constant efforts in holding the mantle for Africa when it comes to entertainment on the global scene. Congrats for holding it down at the Grammys. As for Ghana, shaking my head (smh) I’ll be back,” Stonebwoy wrote on Twitter.
A not too happy Samini responded saying, “Ghana will be ok if we begin to keep it hundred points symbol with each other as artistes my gee. It starts from being honest and calling a spade a spade. Do you think they disrespect Idibia like you disrespect Samini?? #yearoftruth. Before you give extra fake fans to Nigeria #checkyourself faker.”
Stonebwoy, who seemed surprised, declined Samini’s fire, indicating he wouldn’t want to engage him on the social media platform.

“No disrespect, you just finished a Twitter beef with Shatta, is it my turn now?? We know each other personally. I cannot do this with you on social media,” he wrote.
Samini again responded tweeting, “Smh Stonebwoy lol. You know you can’t throw dust in anyone eyes my son. You know exactly where I’m coming from. Don’t trash Ghana in congratulating Nigeria because they don’t disrespect their legends like you do period. A word to the wise. After calling me a sellout on a public stage during your mismatch clash? Who sold out who? We come from #grade1 … you got nerves to be tweeting at me. Shatta Wale is a mate, you are a son … get the difference. You disappointed me, son.”