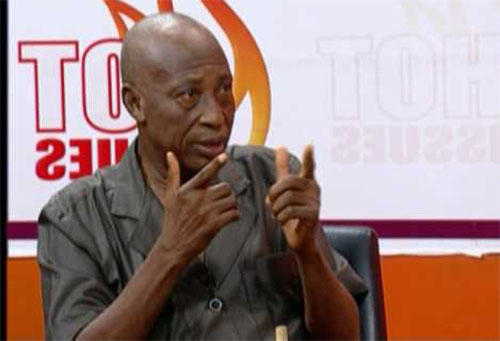 What is this I am hearing? That self-styled Osahene Kojo Boakye Gyan (Major retired) says there will be civil war in Ghana if the Electoral Commission insists on writing a new voters’ register for Ghana?

As an Osahene (war lord), Boakye Gyan fully knows well all about war – breakdown of law and order, senseless baseless vengeful killings, rampant rape of women, hunger, total chaos and brigandage – and Major Boakye Gyan says all this will happen in Ghana just because EC wants to write a new voters’ register?

I wonder what thought processes took place in his mind to lead him to make such a far-fetched absolutely unrealistic declaration.

Fate brought Boakye Gyan into my life in Legon in 1976. One evening, I returned late from lectures at the Law Faculty to hear my roommate Tony Osei-Tutu telling me, “Effah, Captain was here – he said he will be back, so wait for him.”

In those days, the military was in power – SMC I under General I K Acheampong. I was a leading student anti-military campaigner. One day, I remember so well after a lecture by Kwesi Botchway, I stood up from the floor and descended heavily on the military – abuse of power, corruption and so on to a surprisingly wild applause from my colleagues.

When I sat down, the next student seated by me whispered to me, “Effah, the man behind you is an army officer – Major Abobor. “I turned to look at him – he was staring at me, smiling! (He later became a lawyer, a judge and died as a Circuit Court judge).

Later that night, I entered my room – A34, Commonwealth Hall – a tall fair in complexion handsome gentleman, “My name is Captain Kojo Boakye Gyan – Ghana Army”.

He told me he was doing Qualifying Certificate in Law but he could not get time to attend lectures, so he went to see the Dean of the Law Faculty who suggested to him that I was one of the good students whose lecture notes he could rely on, so he had come to ask whether I could ensure that I don’t miss a law lecture so that every Saturday morning he would come for my law notes?

In a familiarization discussion, it turned out that he hailed from Jaman District in B/A Region, and that he was an old student of Achimota School, just like me!

Thanks to Boakye Gyan, my lecture notes for my third year law were up to date and superb – I never missed a lecture. One evening, he came to Commonwealth Hall in the company of another handsome smart-looking Air Force officer, chain smoking, whom he introduced as Jerry, his bosom friend, another old Achimotan!

Every weekend, the three of us would meet and read the debates! The arguments! Hot solid reasons for this or that viewpoint, and slowly my perception of the military changed: all soldiers are NOT zombies. If you commission half-baked drunks as officers, you will get drunks as officers, and if you commission highly intelligent level headed chaps, you will get a military commanded by highly intelligent level-headed officers.

These two officers had such a gripping influence on me that I abandoned the pursuit of law and enrolled at the Ghana Military Academy as a law graduate cadet officer. I was sent to the Royal Military Academy Sandhurst and returned in time as an officer to see the outbreak of 4th June 1979 military uprising, led by my two paddies, Jerry Rawlings and Boakye Gyan.

I love history as a field of study so much that I personally talked to over 50 participants in 4th June 1979 and the conclusion I came to was that the principal master brain behind 4th June was L/Cpl Peter Tasiri of 5BN and a cabal of boys company soldiers who wanted to save the life of Jerry Rawlings from then ongoing General Court Martial. L/Cpl Fulavi of 5BN radio room was the first casualty of 4th June, killed accidentally by my intake mate 2/Lt Agyemang Bio, who then committed suicide.

In subsequent years, anytime I hear Boakye Gyan high on oath pontificating about his role in 4th June – I laugh. He only came into the picture because after the release of Jerry Rawlings from the BNI cells by the 5BN soldiers, Jerry in his initial announcement mentioned his long-time old Achimotan colleague as one of the principal officers – that is all, but now, Boakye Gyan keeps saying ad infinitum that they masterminded 4th June in order to punish Acheampong, Utuka, Kotei and co for removing the democratically elected government of Prime Minister K A Busia on 13th January 1972.

After 4th June, he was promoted Major and sent to London UK to study ‘War Studies’ and then compulsorily retired from the Army. He lived in self-imposed exile in London for over 20 years and returned to Ghana, calling himself Osahene (war lord), joined the NDC and became Constituency Chairman for Jaman South Constituency then resigned to contest as NDC parliamentary candidate for Jaman South but lost the contest to NPP.

Now he lives in Accra, Iike Rawlings over 70 years old, restless, desperately seeking attention, once in a while being garrulous making wild baseless claims.

What has the writing of a new voters’ register got to do with civil war? Jean Mensa and her officers at Electoral Commission want to write a new register because the Charlotte Osei Electoral Commission had so many ghosts ‒ both human and imaginary non-existent polling stations – but even so, NPP, we won, so what is the fuss all about? As Mac Manu said and I agree with him, if because of COVID-19 time is against ElectoralCommission for writing a new register, no problem, NPP will win all the same.

My worry is that either Osahene is being okro mouth, revealing the dark secrets of NDC, beating macabre war drums, vide electoral register, or he himself, suffering from Daily Guide’s post traumatic stress disorder syndrome is planning something sinister to destabilize our peace and quiet.

Whichever way, to be forewarned is to be forearmed. Prevention is better than cure. I suggest that the security agencies should ‘invite’ the Osahene to explain himself and henceforth put him on the security radar.